Timoleague – Mystical Ruin on the Sea 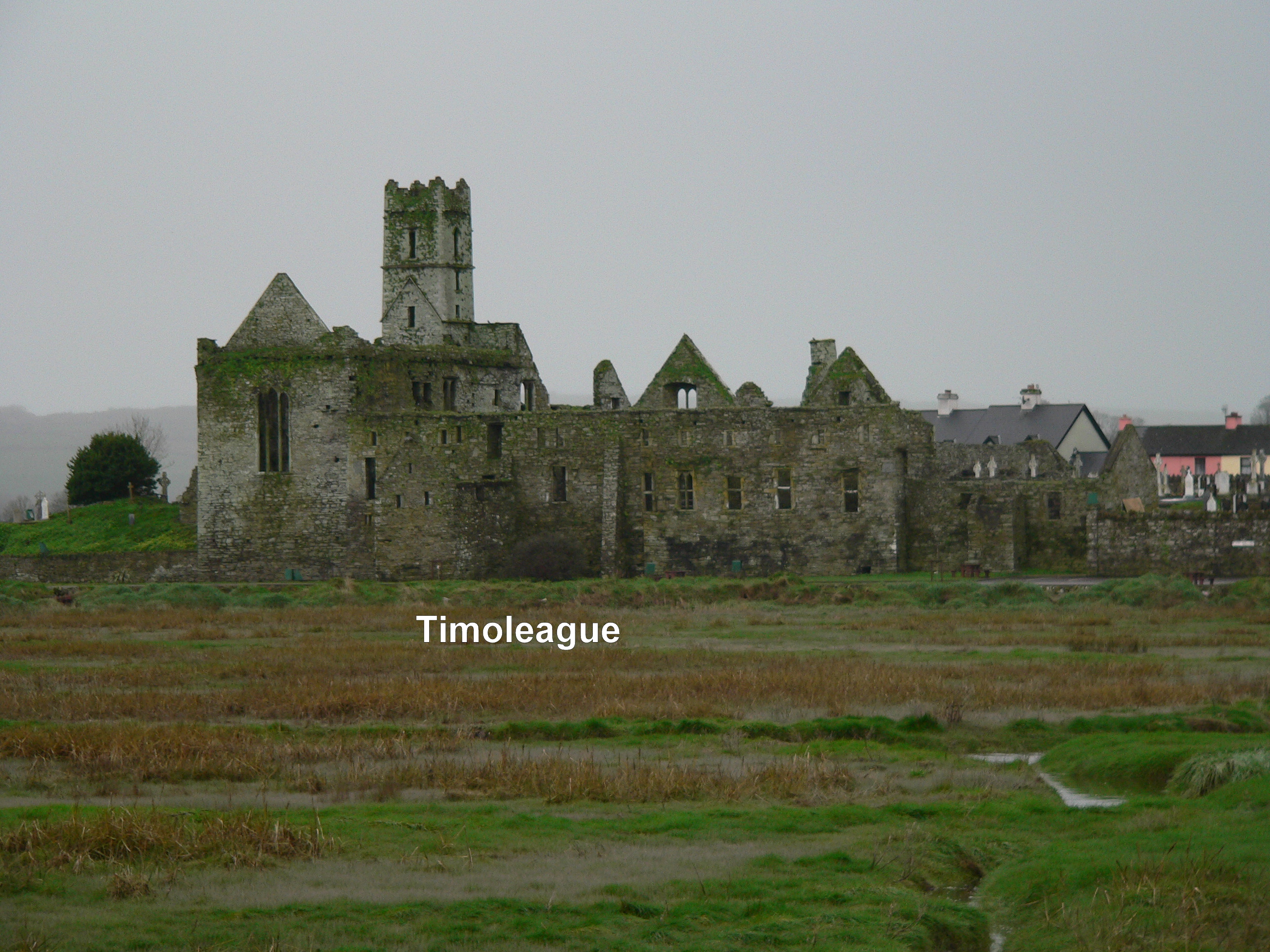 Along the road between Kinsale and Clonakilty, near Courtmacsherry is the village of Timoleague which is dominated by the great seaside abbey ruin, a remnant of a 13th century Franciscan Friary.  The abbey is built on the site of a former monastery founded by St. Molaga in the 7th century.  Timoleague means – “house of Molaga.”

St. Molaga, as the story goes was a local boy who went to study the rule of St. Columba in Iona and then went on to Wales where he became good friends with St. David.  He returned to Ireland and founded several monastic communities, but Timoleague was his greatest – and his last.  He died here – probably of the plague.  He and his followers were committed to helping those suffering from the disease when the plague hit Ireland in the late 7th century.

A story is told about how St. Molaga originally wanted to build his monastery farther up the estuary.  But as he and his followers labored on the buildings by day, they all collapsed by night.  St. Molaga took this as a sign that the Lord did not approve of the location.  So he blessed a candle, lodged it in a rolled up sheath, set it alight and released it on the bay praying that God would help him find the perfect location for his new religious community.  The candle floated until it stopped at the where the Timoleague ruin now stands.  St. Molaga built his monastery on the sea and six hundred years later the Franciscans built an abbey on the foundations of St. Molaga’s monastery.  The ruins of that monastery are what visitor’s see today.

I found this thin place through the recommendation of Mr. Noel O’Connor who was my host at Ashgrove Bed and Breakfast in Bandon.  Over breakfast I asked him, “What is the most mystical place around here?”  He was caught off-guard and hesitated.  As a forma garda (police officer) I suspect he wasn’t invited to discuss “mystical” or thin places often.  After pausing to give it some thought, he told me that many pilgrims go to Timoleague to pray and reflect.  So I took his advise and I went to Timoleague.

What remains is a beautiful ruin now made into a comfortable public space on the scenic Courtmacsherry Harbor. When the monastery was active, boats used to sail right up to abbey, and the village grew around the activities focused there.  Past the picnic tables and the stone wall are bones of the old religious house with haunting traces of how life existed there so many years ago. 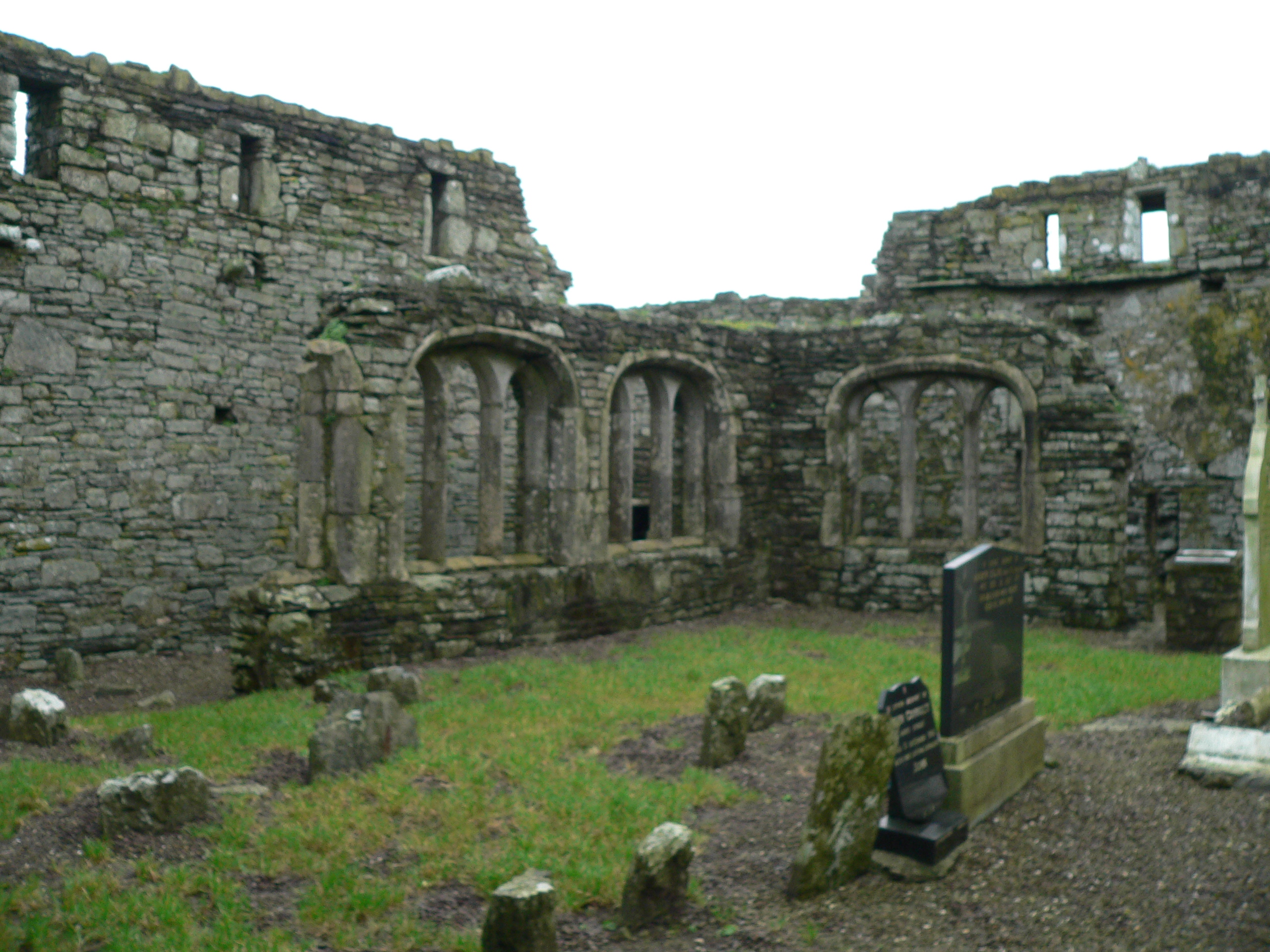 The Cloister Garth at Timoleague

Two favorite spaces for me were the dining room and the cloister walk.  Pictured above is the cloister garth the part of a corner wall still standing.  Monasteries typically had these square cloister walks with an open court-yard type garth in the center.  The walks were the center of the the cloister and often used for doing “rounds” or walking and praying in a circular path.  The walls bordering the garth had gothic-style windows to look out.  I love to trace the steps of those who once walked and prayed here.  On account I read said that at one corner of the walk the incorrupt body of a monk buried centuries before was discovered.  He was reinterred on the grounds.

Another peaceful spot here is the refectory or dining area.  It’s a large rectangular room off the back of the ruin with five tall windows (frames still in tact) looking out over the sea.  Next to this area is a cavity wall, with indentations known as the fairy cupboards.  It was from this room that children discovered an ancient book buried under one of the flagstones.  They destroyed it and only the shred of the cover was found. 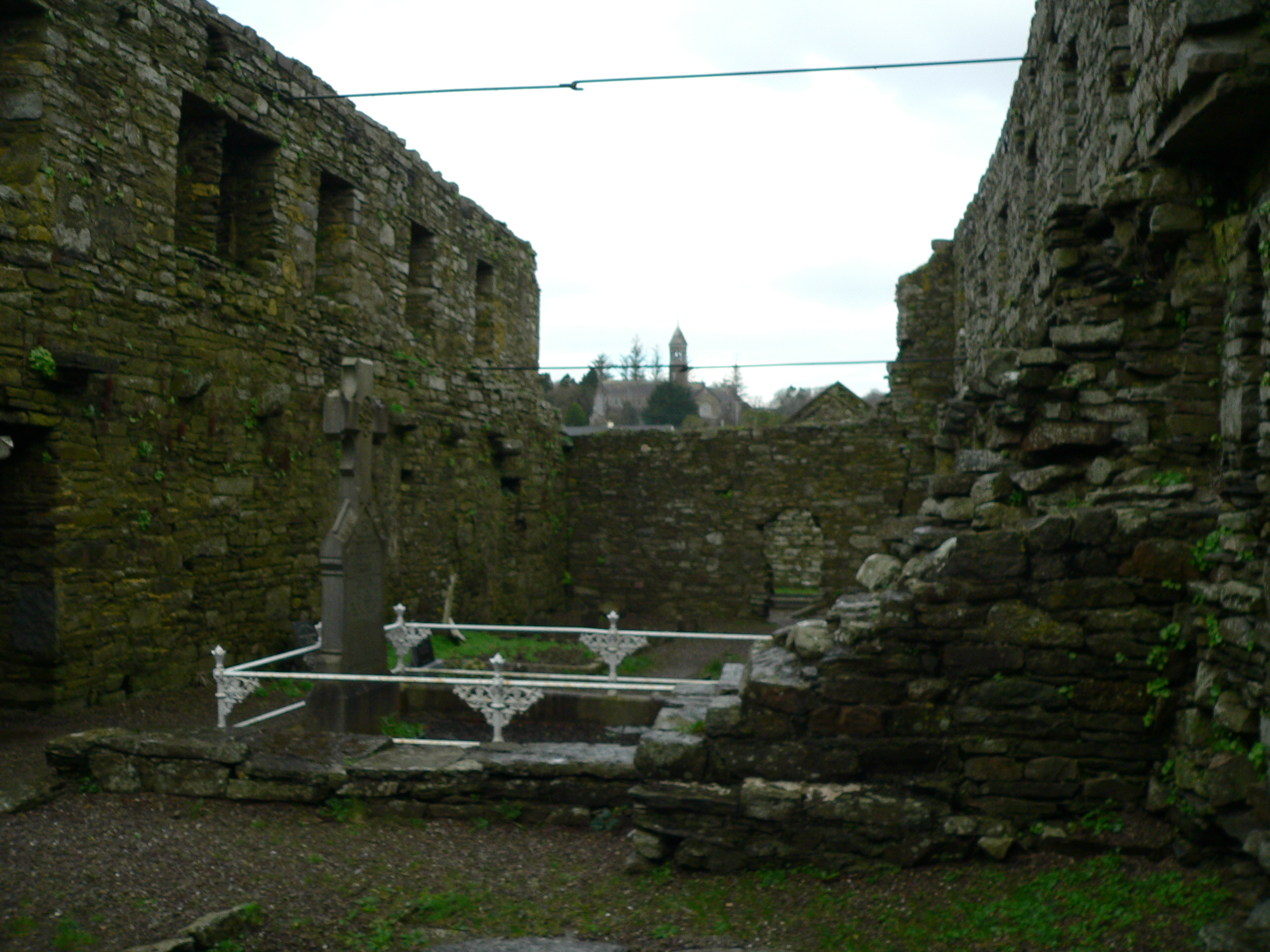 In the sacristy is the ancient holy water font, now known as the Wart Well.  It is said to heal warts when those afflicted dip the warts into the water.

The monastery was sacked in the 1600s and three monks escaped by boat and took with them the Timoleague chalice for safe keeping.  It was discovered in an old box in a home in the village many years ago and is now held by one of the priests residing in Timoleague.

In the distance behind the ruin a round tower (new) can be seen atop a church.  This is the Catholic Church dedicated to the Nativity of the Blessed Mother.  One of Henry Clark’s last stain glass masterpieces can be found here.

Timoleague is a haunting site full of mystery and charged with the energy of the past.  It is one of the stops on the Thin Places Mystical Tour of Ireland in May of 2011. 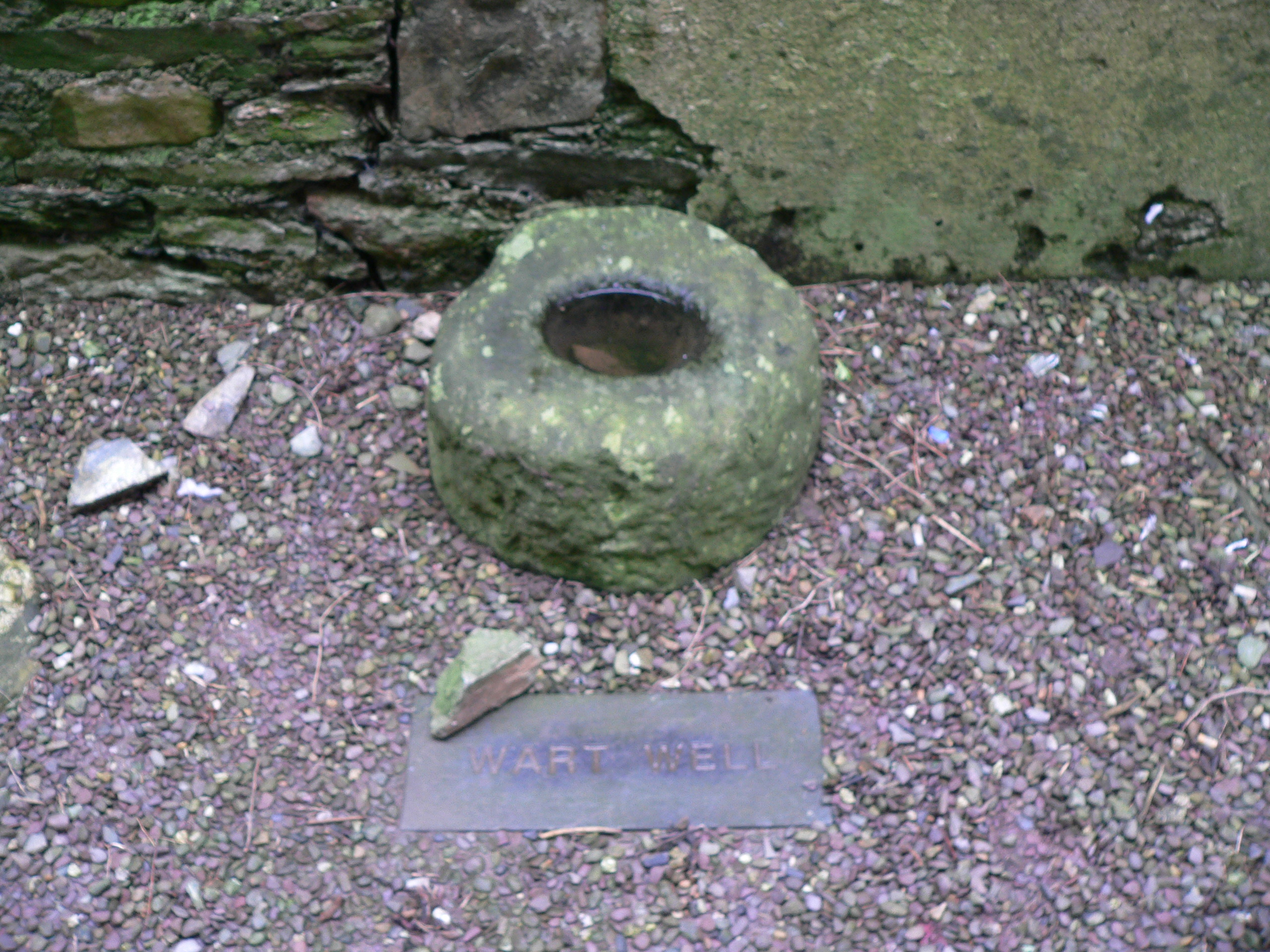 The Wart Well at Timoleague