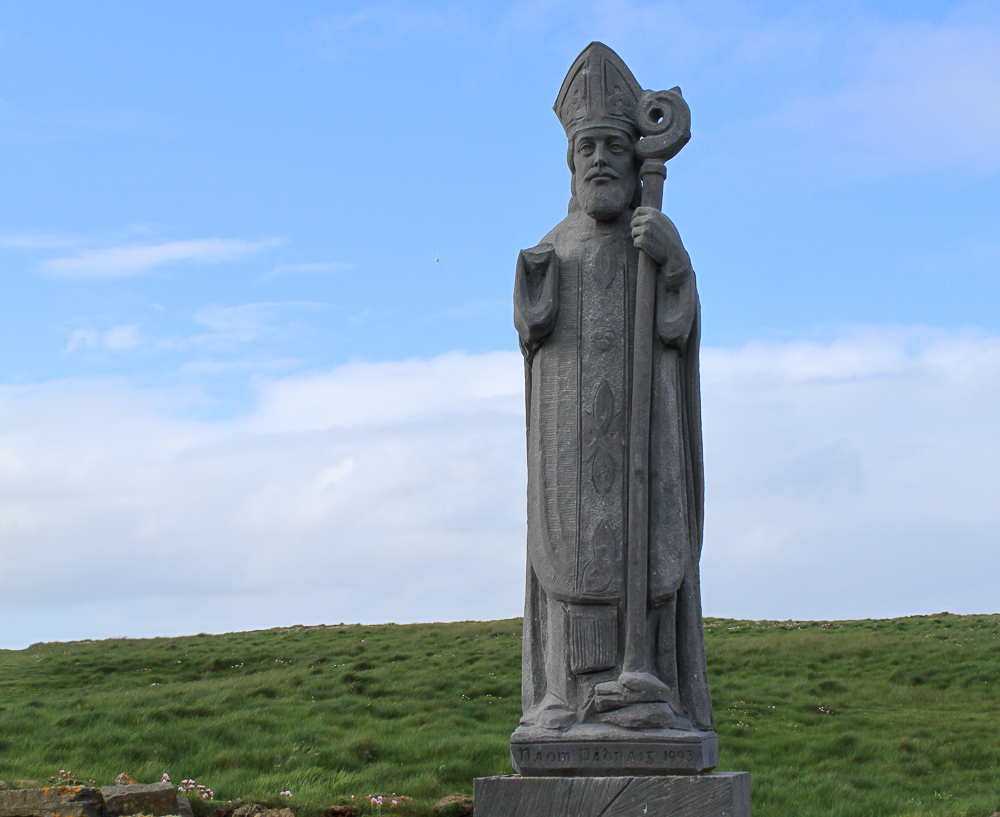 St. Patrick statue near the church ruin at Downpatrick Head.

Downpatrick Head in Ireland is on the north coast of County Mayo. It was named for St. Patrick because he is believed to have built a church there, and there still are remains of an old church and a stone marker that supposedly shows where St. Patrick’s original church stood.

As you approach Downpatrick Head the land opens up in a vast plateau overlooking the wild Atlantic Ocean. You are walking into one of the many “wild places” in Ireland. Even the most boisterous of travel groups will become quiet as they approach the cliffs. The landscape pulls each person into a walking meditation.  It almost demands silence.

There’s a lovely cliff walk where one can survey the crashing waves of the Atlantic Ocean against the patterned cliffs while hundreds of birds roost in the crevices and swoop and dive all around the cliffs. We were there in May when the “sea pinks” were in bloom and we couldn’t resist taking pictures of them on the cliff tops.

We spent the morning in this magical thin place never noticing the passing of time. 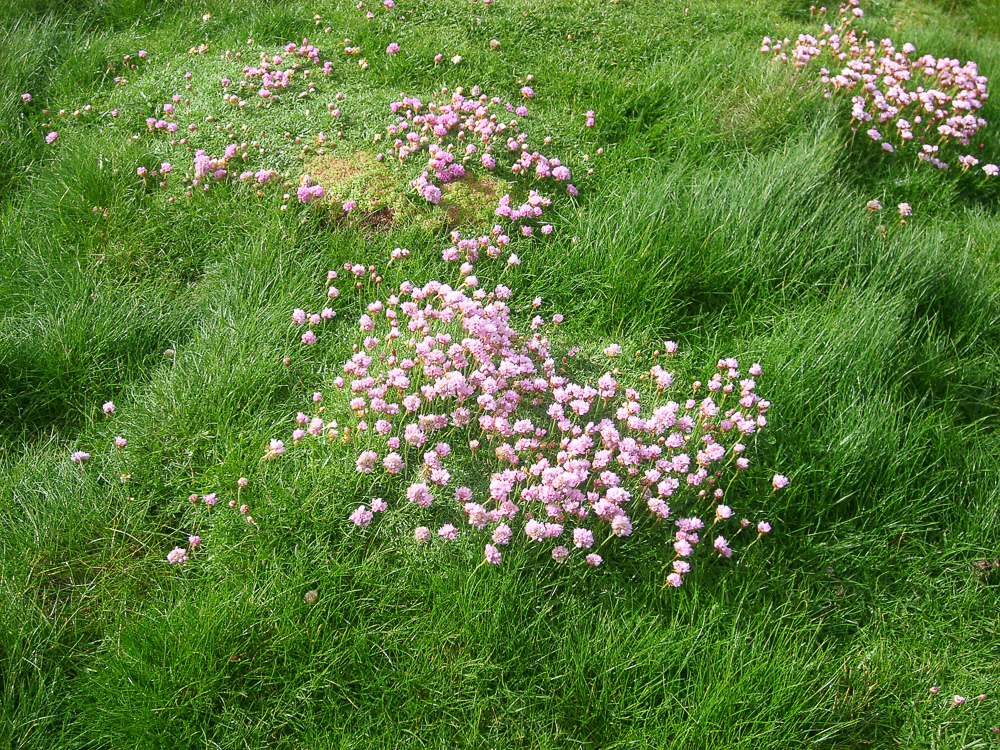 There is also a holy well and a memorial to 25 Irishmen who fled from British Redcoats during a 1795 uprising. They hid in the caves at Downpatrick Head, but couldn’t get back out before the tide came in and flooded the cavern. They all perished.

But Downpatrick Head is best known for Dún Briste (Broken Fort) or “the sea stack” which is an outlying stone stack just off the cliff face. The landscape there defines “wild” which is so common to the West of Ireland. 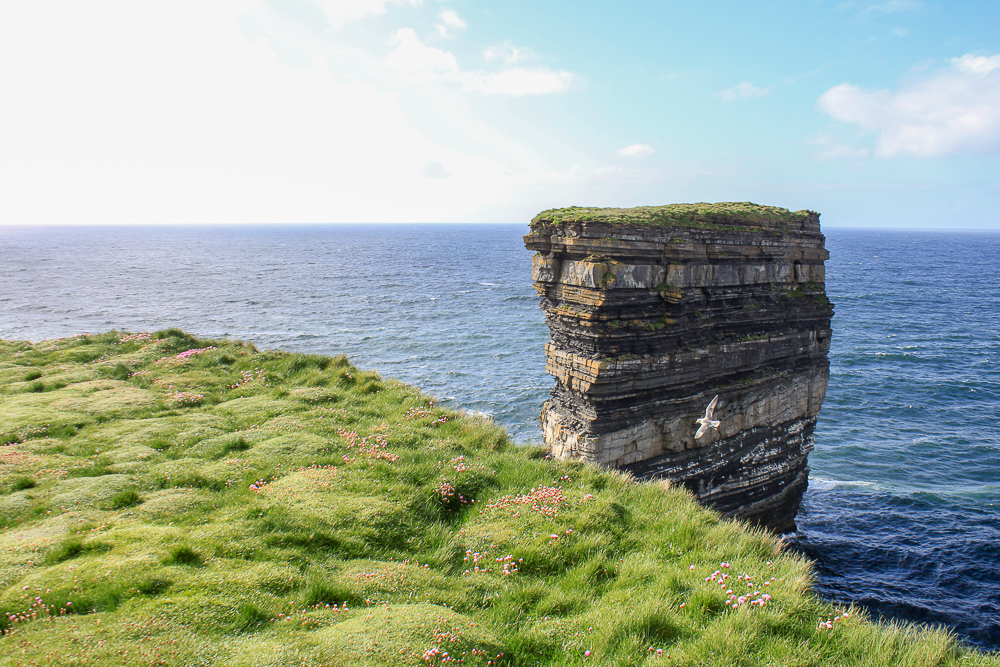 Dún Briste – (broken fort) the sea stack is the landmark most associated with Downpatrick Head in Ireland on the north coast of County Mayo. 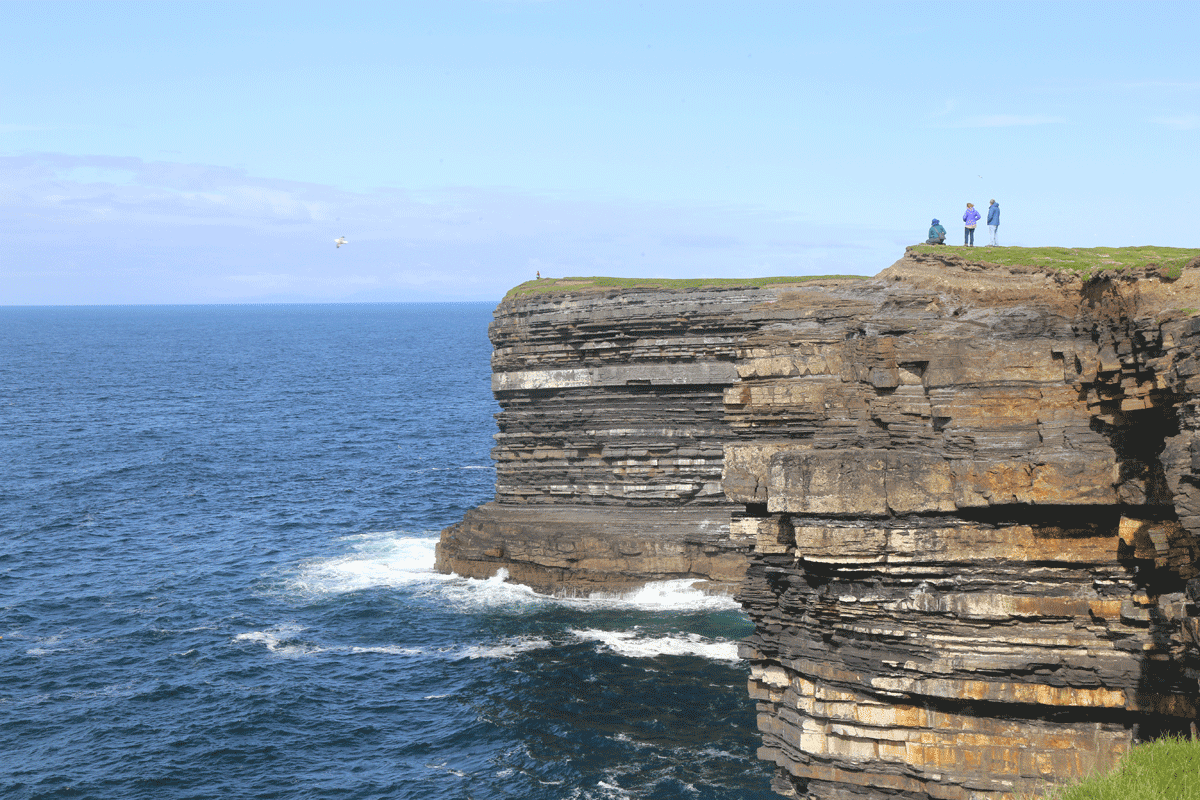 My mind frequently wanders to Ireland. In those rare, still, moments when I can close my eyes and imagine certain places, I almost always go to Ireland. In my imagination, I often place myself at Downpatrick Head. I contemplate the time change – Is it daylight or night time?  Where is the moon (or sun)? Is it raining, cold, warm? Are the flowers peeking through the grass?  I hear the sound of the waves, the wind, the birds. I feel the damp air. In my mind, I notice all of the details. 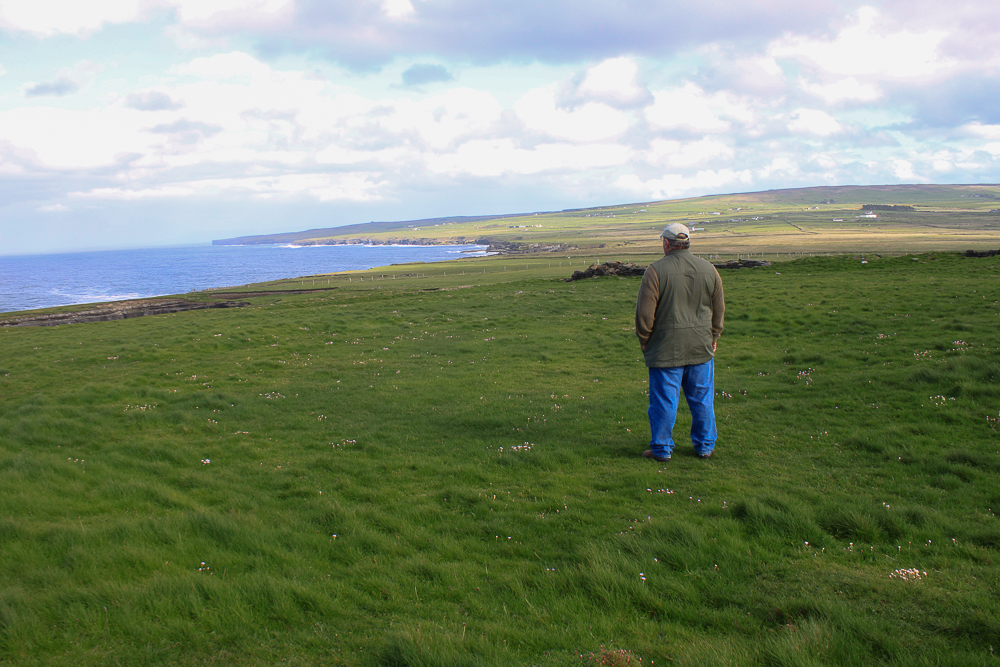 Once I settle into that landscape in my mind, the colors take over, then the sounds, then finally — the wind.  It seems there’s always wind blowing in Ireland.

I’m reading a fantastic new book by Robert Macfarlane entitled Landmarks, which is about the language that developed around elements of the landscape in the UK and Ireland, and the power of “landscape language.”  McFarlane comments in the very first chapter about language shifts that move away from nature and toward technology. 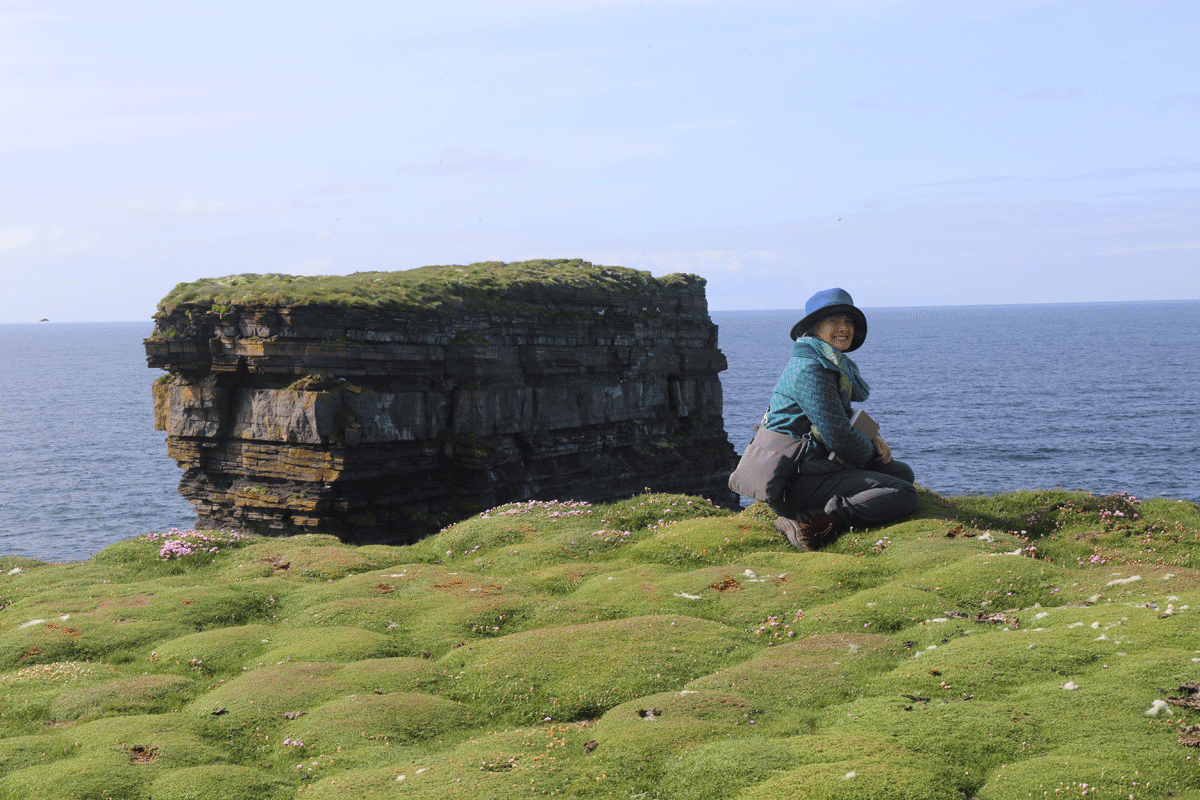 I plead guilty to loving technology, gadgets and the amazing world of telecommunication, but I’ve never embraced it at the expense of stopping and noticing the details in nature.

Sheep roam all over the cliffs at Downpatrick Head … just as they’ve been roaming for centuries.  I wonder if they notice the details.  Probably not. 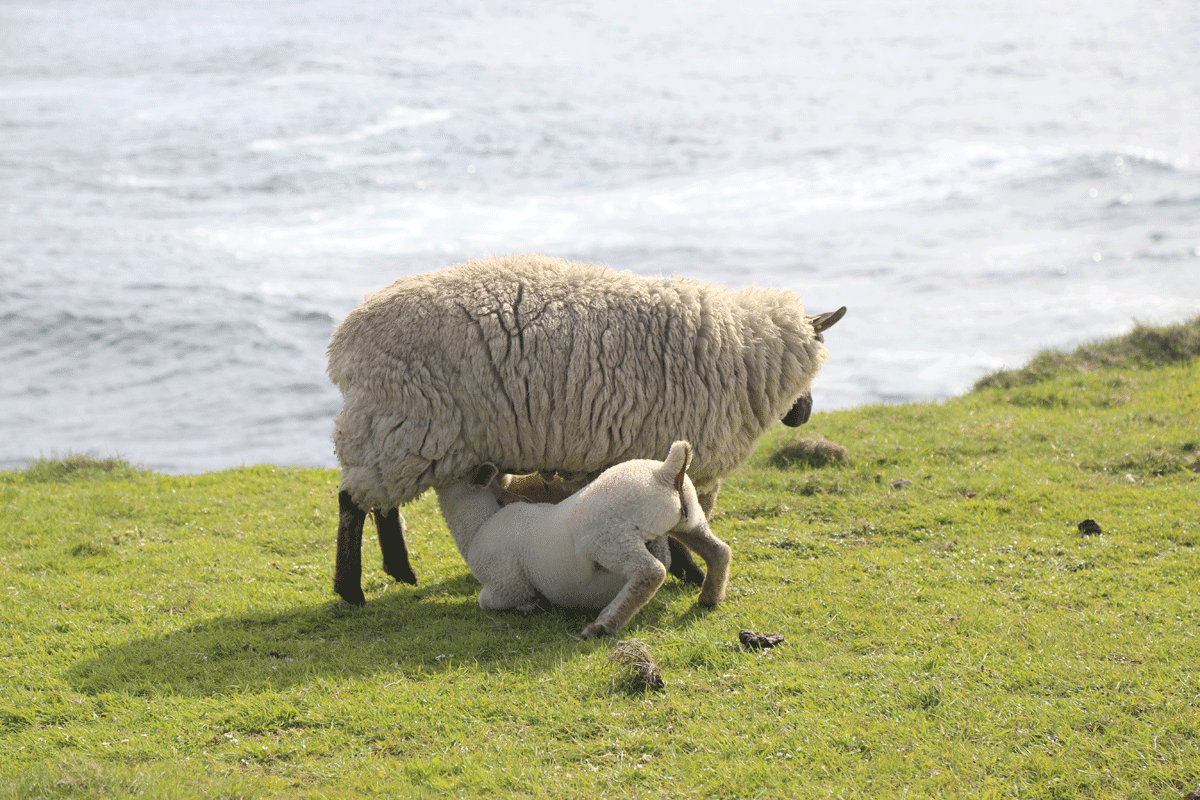 We explore Downpatrick Head is on some of our Thin Places Tours of the Wild Atlantic Way in Ireland.

Photos by Dan and me (Mindie Burgoyne).  Special thanks to Joe McGowan and John Willmott who helped identify “sea pinks” and their healing properties.