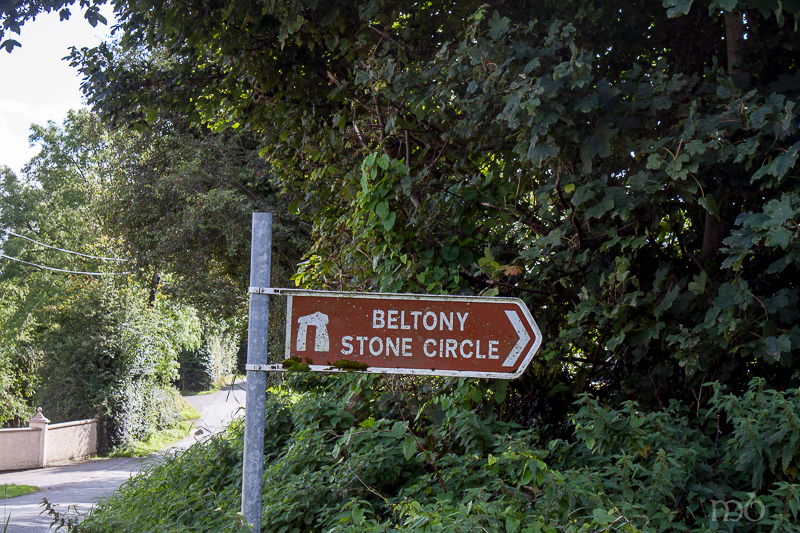 If a thin place is one where the veil between this world and the eternal world is “thin,” then Beltany Stone Circle in County Donegal ranks as one of the thinnest or most mystical sites in all of Ireland.

The circle dates back to 1400 – 800 BC, and is larger than most found in Ireland having 64 stones averaging 6 ft. in height. The circle measures about 145 feet in diameter.  The site was excavated in the early twentieth century and significantly disrupted.  Most believe that there were at least 80 stones in the original circle.  These stones are orthostats – stones set against a rise or wall.  They stand close together hemming in a raised earthen area resembling a kind of kerbing as seen in passage tombs.  Some suspect that the circle and its center mounds could have comprised some kind of burial site that may have once been covered with earth.  Others think the center “lumpiness” is a result of the disheveled condition the excavators left the site in back in the early 1900s. 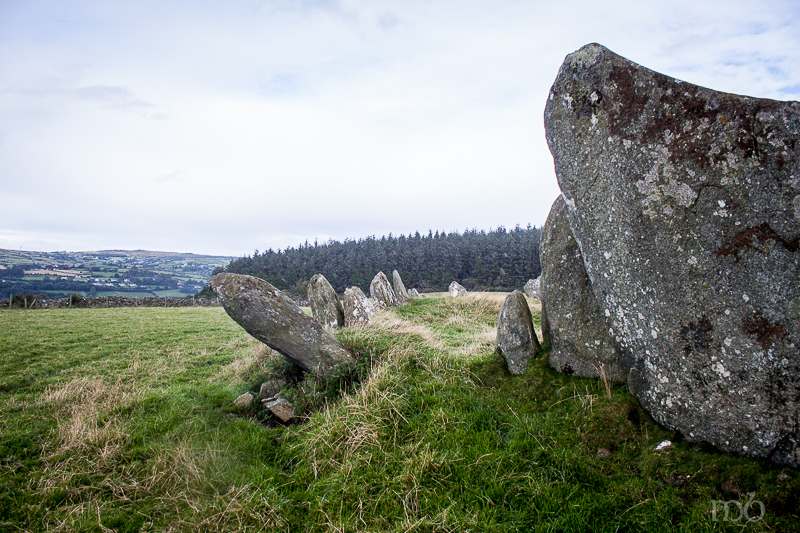 The name Beltany is an Anglicization of the Irish word Bealtaine which is the feast of fire or rekindling the sun.  Bealtaine festivals are celebrated on May 1st which is also the beginning of summer in the Celtic year.  May 1st is the halfway point between the Spring equinox (the day when light and darkness are equal in hours) and the Summer Solstice (the longest day of daylight). The rituals on this day were linked to fire, particularly on hill tops across the landscape.  Some believe this was a kind of refueling or re-firing the sun, or a form of worship that called down a blessing on the land and crops from the god of the sun. 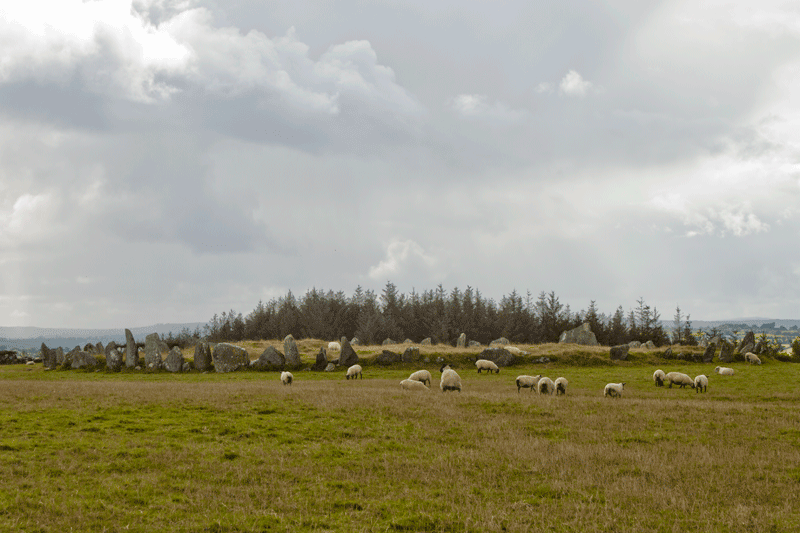 The circle as it comes into view from the wooded path.

The Beltany stone circle is located on Tops Hill.  A wooded path (often muddy) leads from a car park to the summit.  At the end of the shaded path, the landscape opens wide and in the distance, in a lone field one can see the jagged points of stones in a large stone circle.  The transition from path to field feels much like a portal.  There is a defined energy in this fields that grows stronger as one approaches the circle.

But there are two interesting stones in the circle that suggest it was used for measuring the seasons using astrological alignments, and possibly used for rituals related to the sun or sun god.  These would be the tallest stone in the circle and the widest – the triangular stone with cup markings.

The triangular stone with cup markings

Most of the stones are tall and cylindrical in shape listing to one side or the other of the circle line.  They resemble jagged old teeth.  But the wide triangular stone, stands out.  It’s special and immediately draws the eye.  Additionally, it has cup markings on the inner face carved into it long ago.  It faces ENE and stands directly across the circle from the tallest stone (about six feet high) which points WSW.  When the two stones align they point to the summit of a hill  about five miles away in Tullyrap  – a summit where the sun rises directly over on May 1st – the feast of Bealtaine. 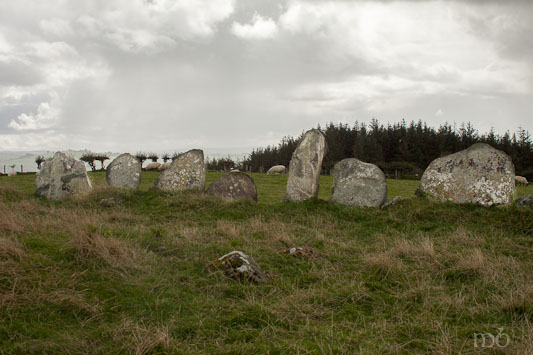 The tallest stone in the circle is center.

There are also noticeable outliers which may also have had a significance.  According to Cary Meehan in her book A Travelers Guide to Sacred Ireland, “a line from the tallest stone in the south western part of the circle taken through the outlier, goes 28 miles south east to Bessy Bell Hill in Tyrone. Another line could run through the circle to Croaghan Hill, 4 miles ESE. ” 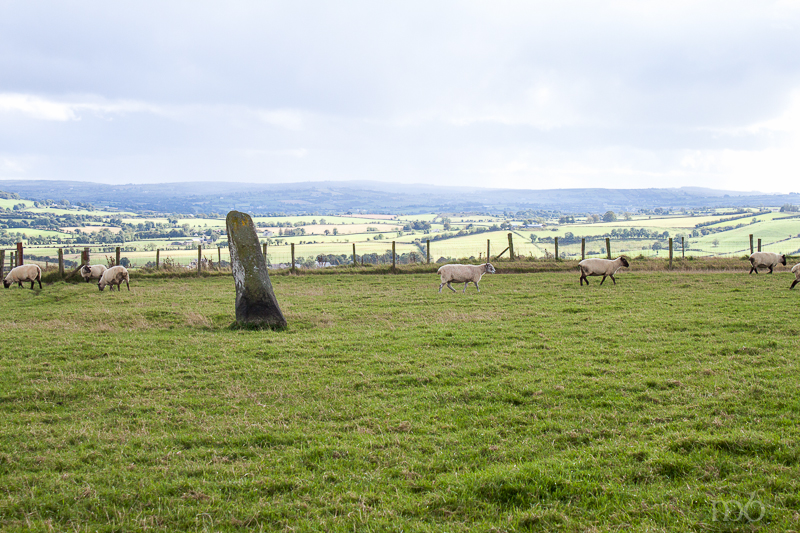 So Beltany Stone Circle could have been a passage tomb(s) or a tool for charting the agricultural seasons.  It may have been aligned with other sacred sites.  We know it was used for celebrations specifically linked to Bealtaine.  Three carved stone heads dating to the Iron Age were found at Beltany during the excavation.  They indicate that the circle was used for many centuries. 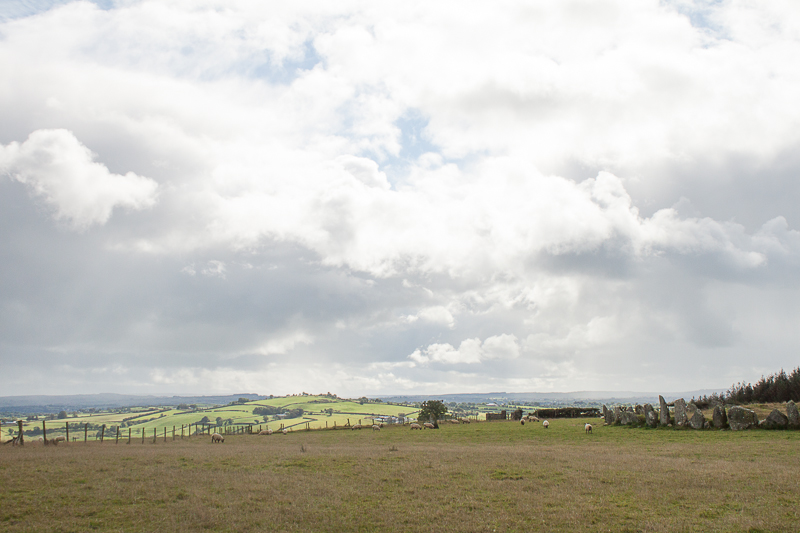 The view from Tops Hill.

Today, though it’s been disrupted and disheveled, it still sits in place – marking the spot so many believed to be sacred.  There site is still charged with energy.  Even in the pouring rain, it offers a sense of thinness, of being in two worlds at one time.

Beltany Stone Circle is on the Images in the Landscape Tour in 2018.