The Rock of Cashel Rises from the Golden Vale 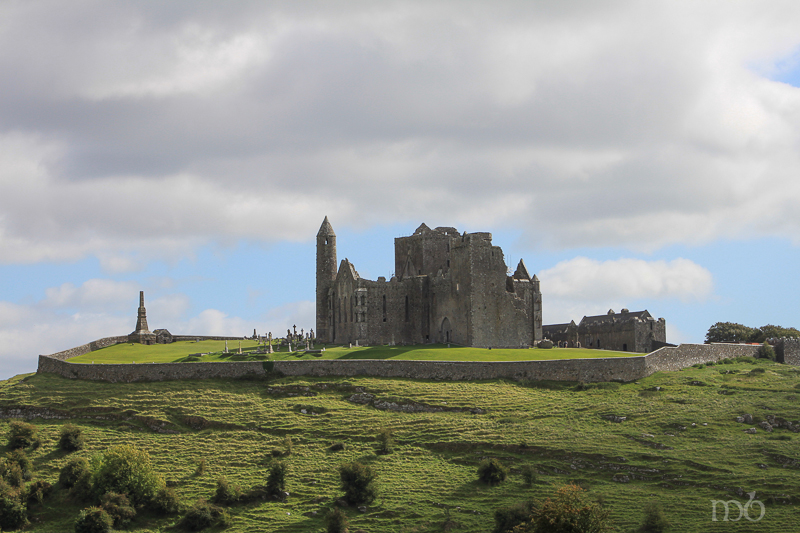 The Pre-Christian and Celtic people of Ireland, Scotland, Wales and England had a keen sense for thin places. The landscape in these countries is littered with man-made markings and ruins that remind the passer-by that this is holy ground. The rocks, trees and landscape hold the memories of spiritual exercises here long ago and present.

Cashel is a thin place.

The very ground itself seems to call out, “Come here and be transformed.” In a quiet moment, the pilgrim today can sense a connection with the souls that have marked these spots with their spirits. Cashel is a vivid reminder that we are all joined inside and outside of time.

The Tipperary Plain also known as the Golden Vale, spreads like a quilt of green and gold velvet patchwork, delineated by hedgerows, lines of trees and occasional roadway, and framed by distant Slieve Bloom Mountains. It’s called the Golden Vale because of the rich, fertile soil which brought prosperity to those who farmed it. Out of the center of the Vale, rising some 200 feet is the Rock of Cashel. 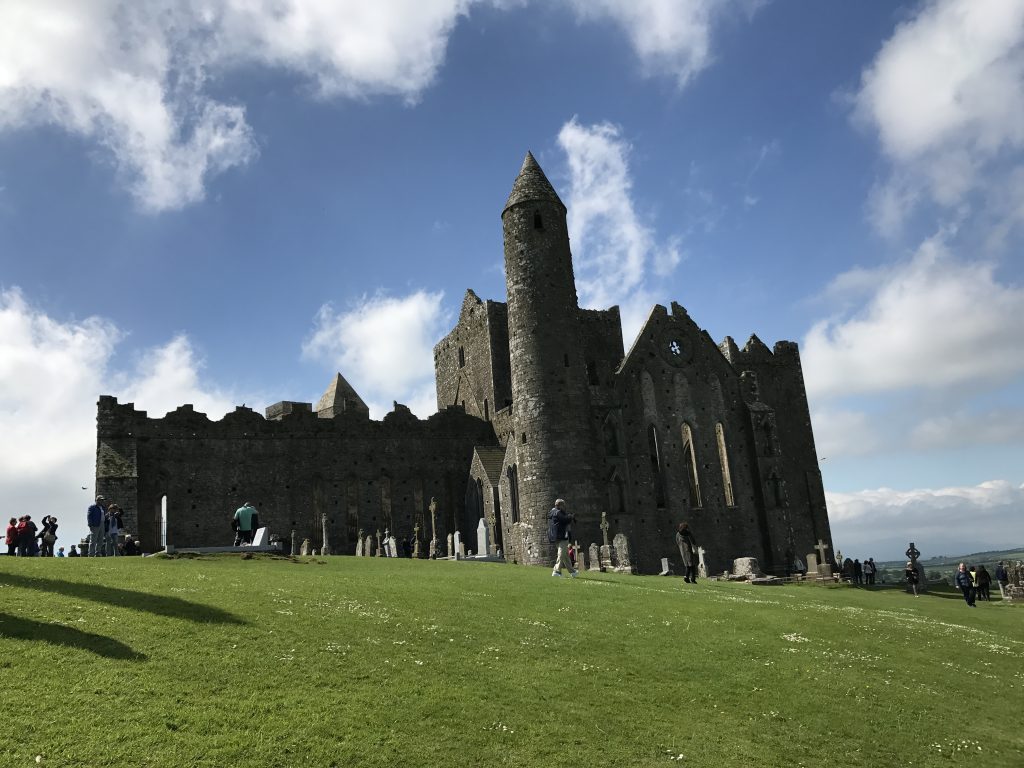 Crowned with the ruins of 11th and 12th century buildings, the Rock is woven into a series of legends, all associated with power and dominance that span nearly two thousand years. The Rock is also referred to as “the Devils Bit.” According to Irish legend, the devil was flying home (presumably to England) when in a fit of anger he bit off a piece of the Slieve Bloom Mountains and spewed it out into the middle of the Tipperary Plain, creating the Rock of Cashel. There is a unique “vacancy” in the hills around Cashel that looks decidedly like a bite. But the Slieve Bloom are comprised of sandstone and the Rock of Cashel of limestone, so the Devil’s Bit theory is unlikely.

Legend states that St. Patrick preached here in the fifth century.  He came to convert King Aengus and baptized the King around 450 AD.  Patrick later made Cashel a bishopric claiming it as a seat of power long before it was the seat of the high kings of all Ireland.

In the twelfth century, a high cross, now known as “St. Patrick’s Cross,” was erected at Cashel to commemorate 800 years since St. Patrick’s visit.  The original cross is quite weathered, but the image of the crucified Christ on the west face and the image of a man (possibly St. Patrick) on the east face can still be made out.  The cross rests on a massive base repudiated to be the coronation stone of the Kings of Muenster. A replica of the cross and base greets visitors as they enter the enclosure on the Rock.  The original cross and base are in the museum – also known as the Hall of Vicars, which also serves as the Visitor’s Center.

The Rock, called Cashel of the Kings – Cashel is Irish for stronghold – dominates the surrounding landscape, its drama unparalleled in Ireland, and its history is every bit as dramatic. For one thousand years it was the seat of power for Irish kings and bishops, ruling the surrounding country, and for a time, the entire country. For 400 years it rivaled Tara as the seat of power for all of Ireland. The kings of Munster were crowned here and ruled from Cashel. In 978, Brian Boru declared himself High King of Ireland and was crown on the Rock of Cashel. He made Cashel his capital. Brian Boru was the first to unite all of Ireland with its centuries-long history of warring clans and tribes. He was also the last to unite all of Ireland, for since his death in 1014, no one person has unified the populations in all four provinces.

Boru’s descendants ruled from Cashel for one hundred years after his death when Murtagh O’Brien in 1101 gave the Rock of Cashel to the Catholic Church and it began to thrive as a Cathedral.

In 1647 the Earl Inchquin (under Cromwell’s influence) plundered the city.  The townspeople fled to the Rock for safety and barricaded themselves in the Cathedral.  Inchquin’s army piled turf around the cathedral and set it afire.  All inside were burned to death.  Over 800 people perished under that attack.  The Rock was later abandoned, left to fall further into ruin.  Finally, in 1874 it was declared a national monument and since then has been lovingly restored.

I will never forget the first time I saw the Rock of Cashel.

At 10:00 a.m. we came down the Tipperary Road into Cashel. Seeing the Rock emerge from the landscape stirred childhood memories of seeing Emerald City rise up at the end of the yellow brick road in the Wizard of Oz. It was a moment when time stood still, burned in my memory like a trauma or birth.

That day we climbed the Rock of Cashel and wandered through the Cathedral ruins and cemetery. I knew nothing then about the history, who lived there, who ruled from there, what events took place there, but I knew it was a thin place. There was something exhilarating about Cashel, an excitement, a sense of power.

Cashel has long been linked with power. Warriors, chieftains, kings, princes, saints and bishops have all come here to mark the Rock as the seat of power, and blood has been spilled in that struggle for power. The Rock is not a peaceful place – as its legacy is riddled with memories of those who fought for power, stole power, ran to take refuge under the mantle of the powerful, and those who gloriously won the power.

The thinness is palpable. Your spirit is awake at Cashel.

I have returned to the Rock of Cashel with every visit to Ireland. I have seen the Rock lit up at night, covered in rain and mist, set against the frigid winter landscape and lingering through the long days of summer where the sun barely sets before rising again.

The Rock of Cashel, though in ruin, has a constancy; a historic brilliance that defies the modernization that grows around it with new homes, buildings and roadways. Cashel boldly claims her history, memories of kings, chieftains, warriors, bards, and holy men – thrusting them before us, urging us to enter in to her ancient legacy – and to return, and return and return.

So many people ask me, “What should I see on my visit to Ireland?”

I always say, “Don’t miss the Rock of Cashel.” Sadly, only a few heed my suggestion.

They’ll never know what I know… that Cashel will seduce you like a lover and cling to your spirit, planting some small charm that draws you back to her, creating a hunger for reunion. With each visit your are strengthened and sustained … until the next time. Cashel is like a first love. Though time, distance and life experience may stand between you – you never forget her, and you will return to her over and over in your imagination. You are changed forever for having known her.