Newgrange – Meet Me Here at the Winter Solstice 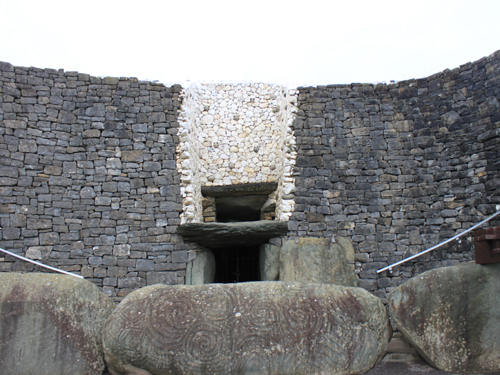 Tomb Entrance – Lintel Above the Door allows light passage into the tomb.

Newgrange passage tomb in the Boyne Valley – County Meath, Ireland is the oldest, fully in-tact building in Ireland, and probably in western Europe. According to Mary Gibbons who offers excellent tours of Newgrange, the tomb dates back 5000 years, predating the pyramids of Egypt, Stonehenge and all the other tombs and prehistoric enclosed structures in Ireland and Britain. Newgrange was a center for spiritual ritual and has remained intact since the Stone Age. The inside is large with a center chamber large enough for 20 people to stand and three side chambers. Early people of the Boyne Valley placed cremated remains in these side chambers.

If the Middle Ages had their cathedrals, the Stone Age had its passage tombs, and Newgrange is the equivalent of Rome.  Mary Gibbons’ most memorable quote for me is, “Newgrange is the oldest building in the world still standing in its original form.”  The “building” is what’s inside – the door, the descending path, the roof, the carvings, the walls, the side chambers.   This was a feat of precision engineering.  And 5000 years later, it still works. 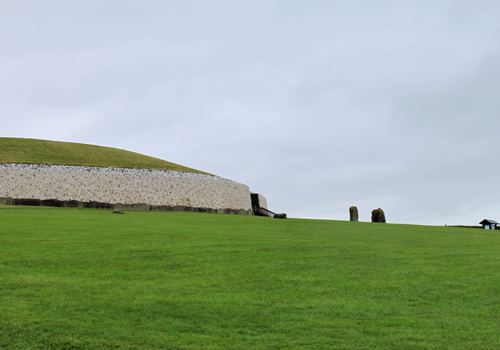 From the outside, Newgrange looks like a large, flat, round building with a grass roof and stone sides. These outside cosmetics are new and not part of the original structure. But the tomb itself and the entrance has not been altered. The entrance is dominated by a mammoth-size boulder with intricate spiral and diamond shaped carvings. One had to cross over this stone to gain entry.

Above the entrance to the tomb is a stone lintel which allows light to pass into the tomb on the Winter Solstice (December 21) – the shortest day of the year. Newgrange was built according to a specific blueprint that allowed for the tomb to be illuminated by the sun on the day when sunlight shines for the shortest amount of time. The illumination is a gradual beam of light that pierces the pathway into the tomb and shines across the floor.  lasts approximately 15 minutes. Then total blackness sets in again … until the next year.

This illumination is simulated for visitors with a flashlight.  Though it’s not “pure” light, it’s still pretty impressive to experience. Every visitor in that chamber is wondering the same thing …. “What would it be lie to be here at the Solstice?” 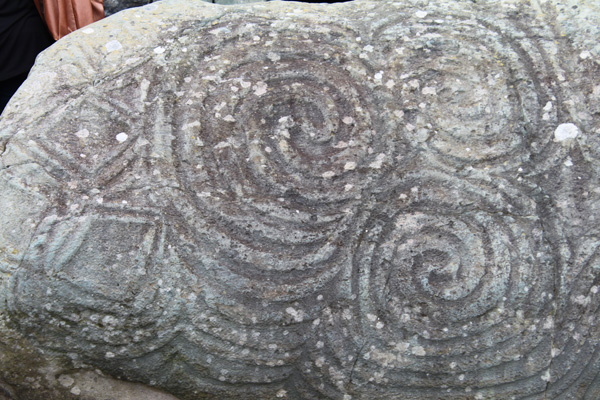 Ancient carvings of spiral designs were common in this age and region, but Newgrange has the rare “triple spiral” on both its entrance stone (shown below) and on the wall of the tomb. Who knows what the spirals meant?

Everyone wants to be at Newgrange during the winter solstice – including me.  But to be present, you must enter the yearly lottery.  Applications are at the Bru Na Boinne Visitor Center.  If you can’t fill one out in person, you can email and request a staff person there fill one out on your behalf.  The drawing for 50 lucky people (who are invited to bring a guest) happens in September.  Last year there were 31,531 entries. 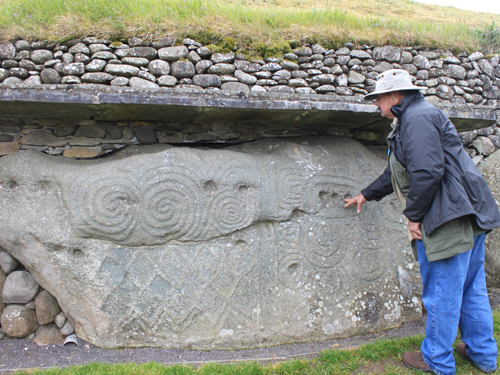 Dan Burgoyne examining one of the curbstones

Spirals and diamonds appear on other stones at Newgrange, including one of the curbstones around the back. Many have guessed at what the spirals mean. The best definition I heard was the the spirals symbolize how time passes – rather than linear, time is circular, like the seasons. While we live in this time we could be passing closely by those who lived before us and will live after us. Time turns – rather than passes. 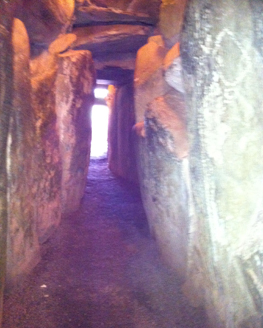 Newgrange – coming out of the tomb

Though it’s against the rules to use any cameras in the tomb, I snapped this photo with my cell phone as I was exiting. It shows how narrow the path is. It’s amazing that all the calculations for building the tomb still fit, allowing the sun to penetrate the darkness on the Winter Solstice. Light must have been important to the Boyne Valley early civilizations. It was here that they built one of the greatest tributes to “light penetrating the darkness.”

Newgrange, along with the Hill of Tara and the surrounding Boyne Valley are the first stop on the Thin Places Mystical Tour of Ireland scheduled for May 2012.

We join Mary Gibbons’ tour and it is fabulous commentary as Mary is both an archaeologist and a historian, as well as a Western Ireland native with a cheeky sense of humor.  Her tours are one of the highest rated in Ireland.

Check out this year’s itinerary and join us!