12 Pictures that Will Make You Want to Tour Ireland

Ireland and its thin places have such a draw for those interested in traveling a bit deeper into the landscape.  Here are 12 pictures that show some of these amazing places.  All of them are on our Castles, Saints & Druids Thin Places tour this September 2014.  Join us! 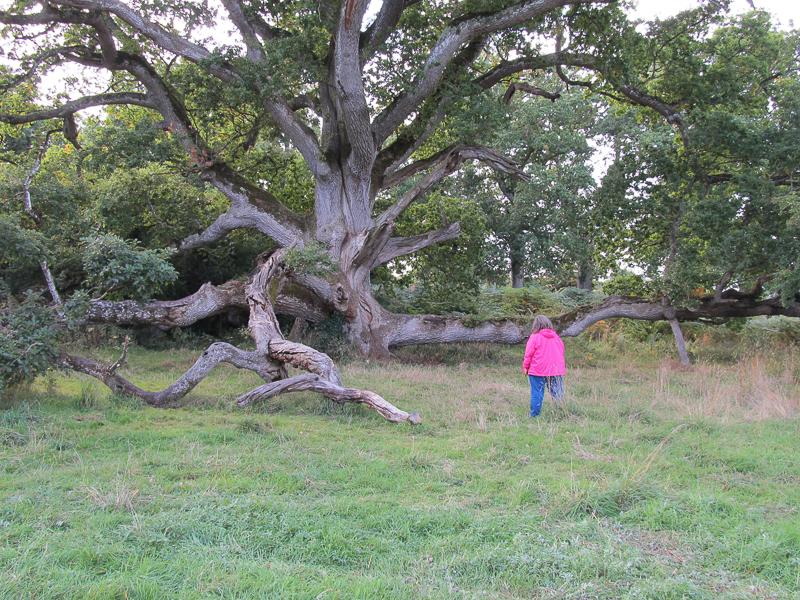 The King Oak – 700 years old, in the ancient oak grove at Charleville Castle

The King Oak is said to be between 500-800 years old. It’s part of an ancient oak forest once sacred to the Druids, then later the site of a monastic community. The forest entombs Charleville Castle, a gothic-style castle built from 1798-1812. The King Oak ranked #3 in Europe’s Tree of the Year 2013 and it’s a familiar old spot to the people around Tullamore. Many a romance started and ended beneath the branches of this tree. The spread of the lower branches spread out over 150 feet from end to end. This oak is set in an ancient grove with other trees that are hundreds of years old. When the British invaded Ireland and occupied the country, they ravaged the land, stripping it of all its forests, then exported the wood for profit. Fortunately this oak forest was part of a 1700 acre “gift” from Queen Elizabeth I to the Moore family. The gentry tended to keep the trees on land around their homes. This oak forest has been considered magical for centuries. 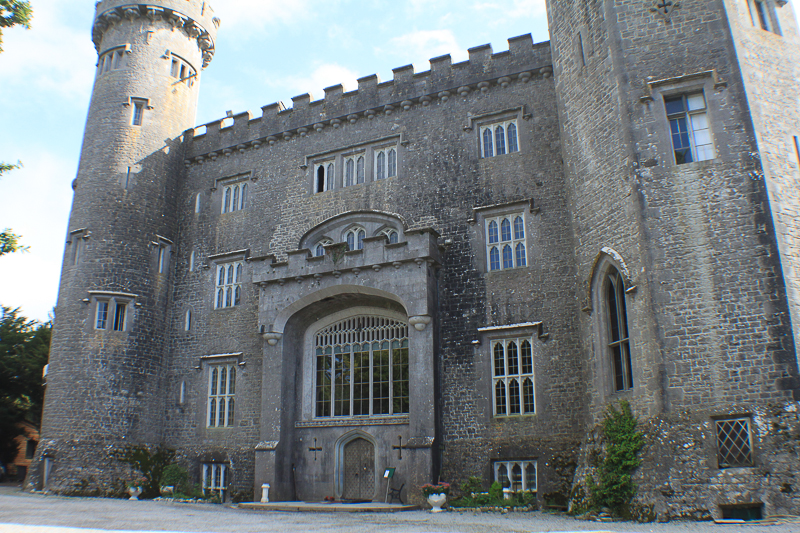 Charleville Castle was built by the Earl of Charleville between 1798 and 1812 in an ancient oak forest near Tullamore. The site was formerly occupied by the Lynally monastic community, and before that was used by the druids for sacred rituals and ceremonies. It is currently owned by a non-profit that uses volunteers from all over the world to help restore the castle and bring it into a self-sustaining existence. The caretaker says that the designers of the castle were Masons and positioned the round towers on crossed ley lines which creates a powerful energy field in the tower rooms. The caretaker also has experienced ghostly sitings that include druids, the Earls of Charleville and the castle designer. Many believe that a little girl named Harriet who was the daughter of the third Earl of Charleville haunts the back staircase where she fell to her death after trying to slide down the bannister. Charleville Castle and its surrounding oak forest is considered one of the scariest places in Ireland. 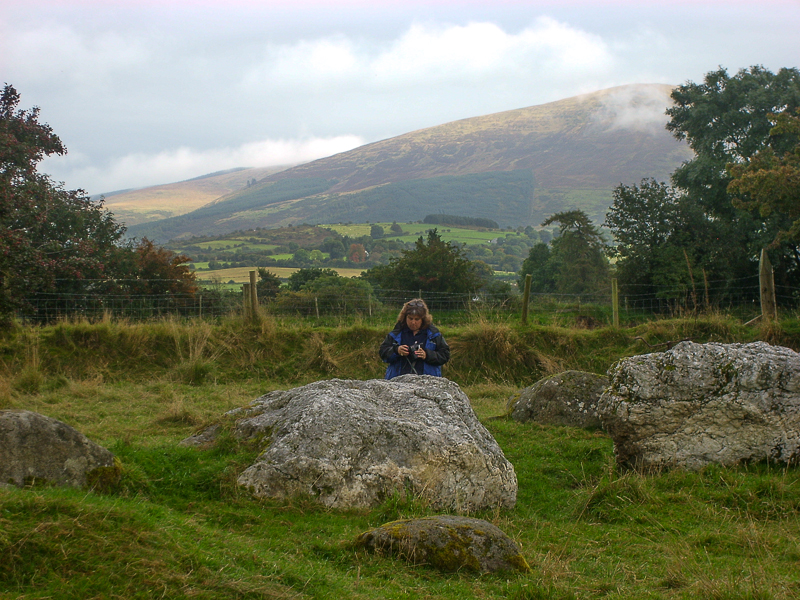 Castleruddery Stone Circle in County Wicklow is a Bronze Age Druidical circle once used for ritual.  There are a total of about 40 stones on the site but the circle itself has about 20 standing stones places on a raised embankment.  This would have been a place of great importance based on the geographic layout of the stones, embankment and ditch that is dug outside the embankment.  Two large quartz stones mark the portal (entrance) of this circle. Quartz in an amplifier of energy and believed to have healing properties.  Some locals from this area believe this stone circle has healing properties.  There is also a fairy tree in the circle (pictured here).  The roots are wound around a standing stone.  Some of the stones have cup marks carved into them and notches carved across. 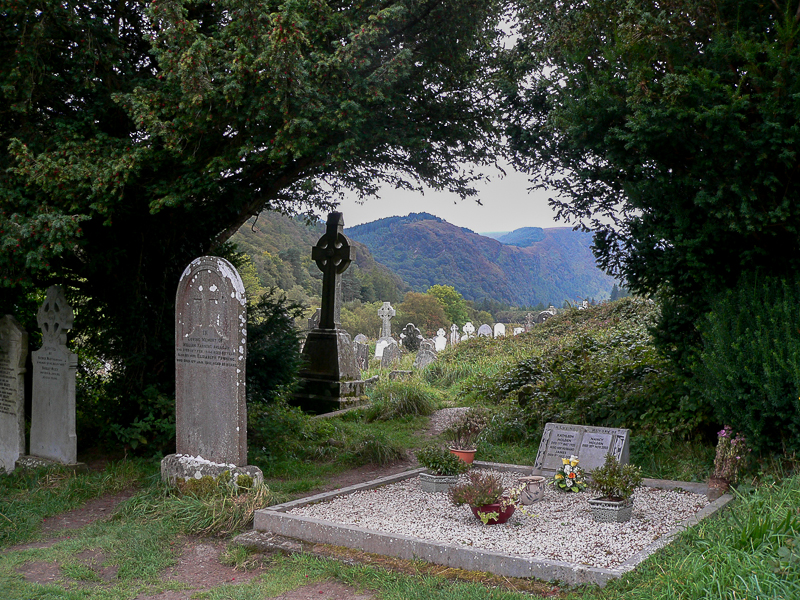 Set in the Wicklow Mountains, Glendalough (meaning valley between two lakes) features  the ruins a Medieval monastic city founded by St. Kevin in the 6th century.  In the last two centuries it’s been used as a graveyard for local families, but the old bones of the monastic city can still be seen in the hilly landscape.  ruins of churches, round-towers, buildings dating from the 9th to 13th century make this site absolutely enchanting.  The views of the glen and lakes and babbling stream connecting the lakes are also remarkable.  Our Castles, Saints and Druids tour group will be overnighting in the Glendalough Hotel in September. 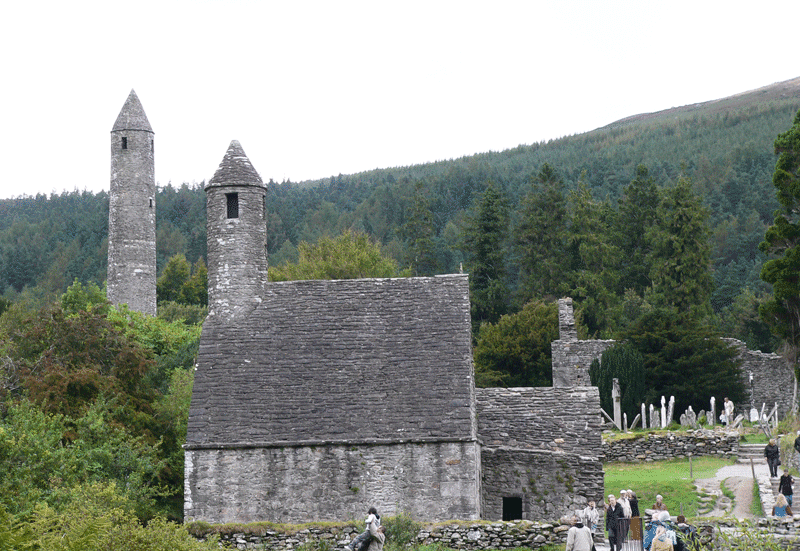 St. Kevin’s Kitchen is a 12th century church in Glendalough, and often used as a defining landmark for the ancient monastic city.  The church has a stone roof with a round tower built into the roof.  Round towers were used for bells, for look-out stations to see people approaching from a distance. 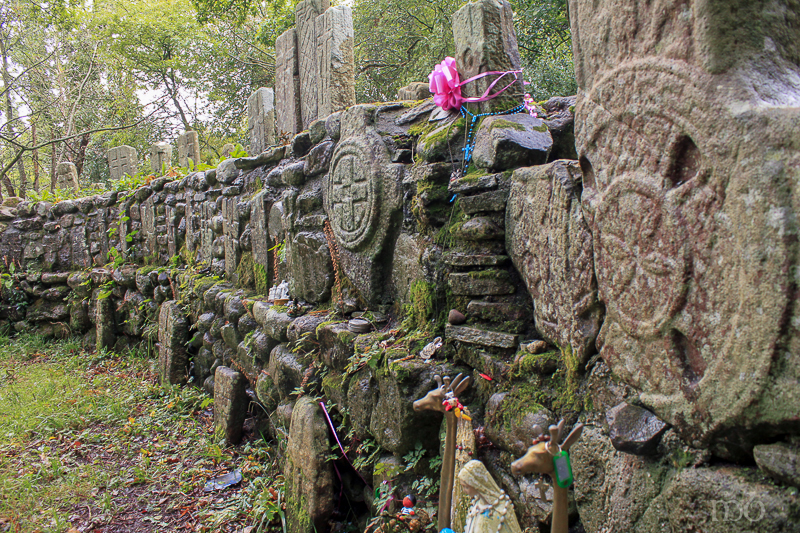 St. Berrihert’s Kyle is a round structure built by the local people from pieces of an old monastic ruin.  It was made to mark a Cillini or burial ground for unbaptized babies and others not qualified for sanctified ground. The kyle is a complete circle set in an oak grove in the Glen of Aherlow in County Tipperary.  Pilgrims travel from all over to pray here.  They leave behind devotional tokens – some very rare.  These tokens are offerings left in hopes that their prayers will be answered.  There is also a holy well (more like a small pond) nearby that is flanked fairy trees covered in clooties, also left by pilgrims.

7. The Rock of Cashel 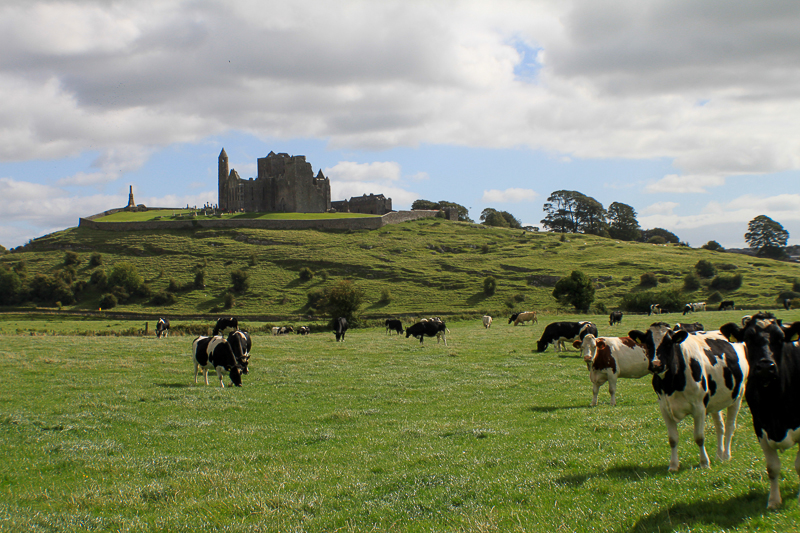 The Rock of Cashel – Tipperary

If the Rock of Cashel doesn’t inspire you, nothing will.  This cluster of ruins atop a rocky  hill in County Tipperary can be seen for miles.  It always reminds me of Emerald City in the Wizard of Oz.  The Rock is set in the middle of agricultural land known as the “Golden Veil” because of the bounty of food it produces, and that land is ringed by mountains. The views from the Rock are stunning, and the energy and power of the site radiates in almost fearsome abundance.  This is a must-see site in Ireland. 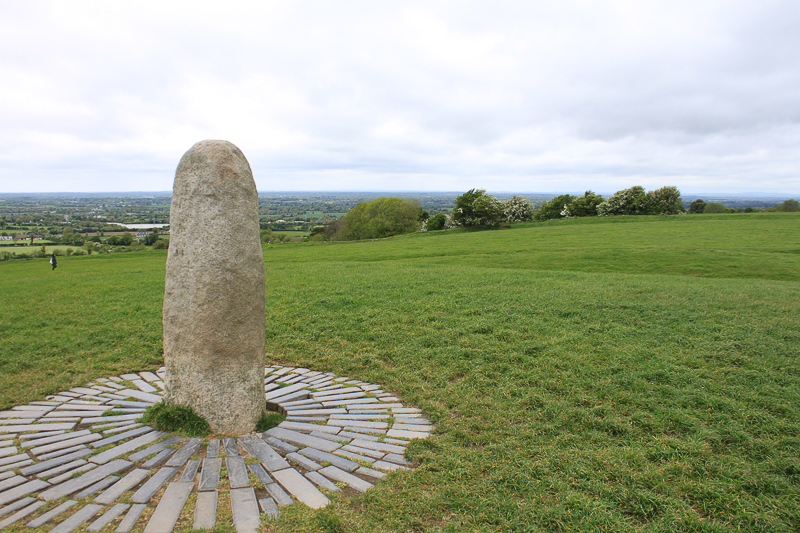 This is the Lia Fáil or Stone of Destiny perched atop the Hill of Tara – a corronation site once used for crowning the High Kings of Ireland.  An old legend states that if the true High King was crowned, the Lia Fáil would literally cry out or roar.  If this stone looks phallic to you, that’s because it’s meant to look that way. The ancient pagans didn’t have the sexual hang-ups of our present world.  They believed that male and female were two aspects of the Divine.  In this case the stone may represent the male Divine aspect in union with the female aspect (the earth).  The stone is believed to have magical properties – those properties were demonstrated the roar of the stone during coronations.  The Hill of Tara has a brilliant earth energy. 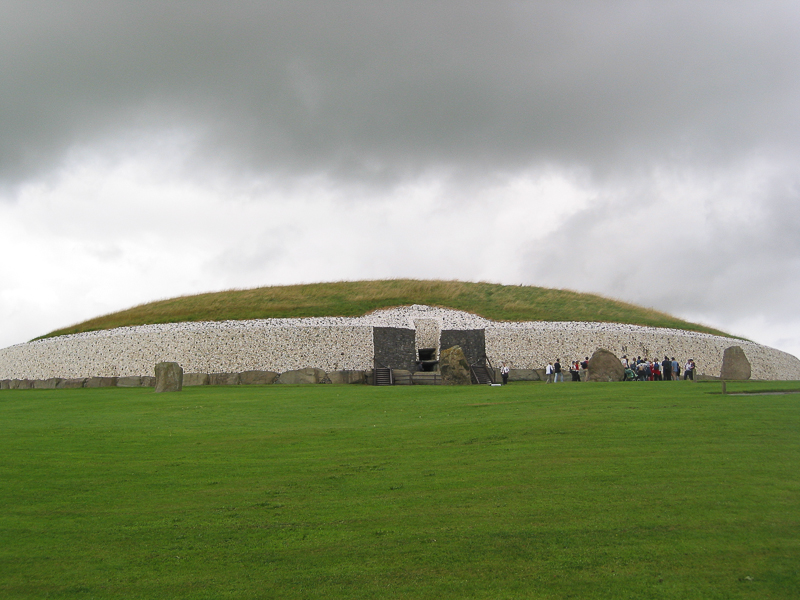 Newgrange, the Boyne Valley is Ireland’s oldest building remaining fully intact. The tomb dates back 5000 years, predating the pyramids of Egypt, Stonehenge and all the other tombs and prehistoric enclosed structures in Ireland and Britain. Newgrange was a center for spiritual ritual and has remained intact since the Stone Age. The inside is large with a center chamber large enough for 20 people to stand and three side chambers.  The entrance is shown in this image (center). Above the opening the tomb is a stone lintel which allows the passage of light to penetrate the pitch blackness of the tomb during the sunrise on the Winter Solstice (December 21) – the shortest day of the year.  Visitors to Newgrange can walk deep into the passage tomb and a guide uses an electric light-beam to demonstrate the shift from dark to light during the Solstice sunrise. 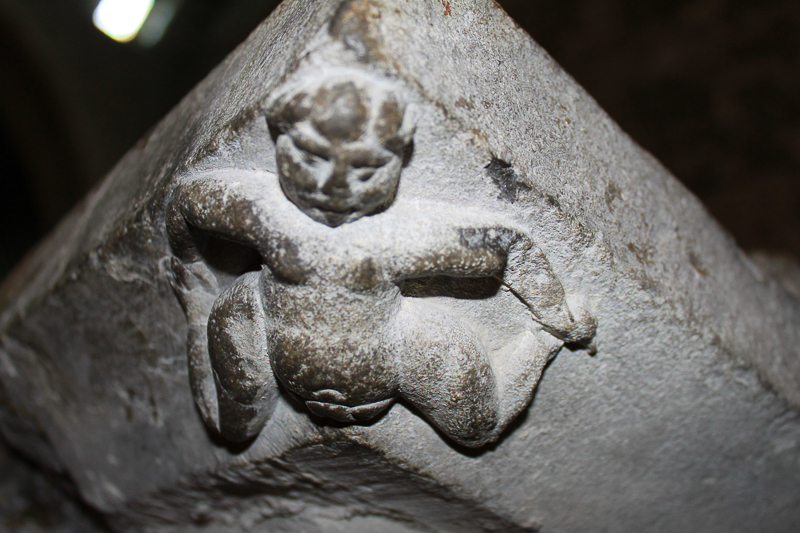 There are people who search for Sheela-na-gig’s all over Ireland and in other Celtic countries.  These figures are usually primitive carvings in stone that depict a female revealing her genitals with legs spread wide open … usually with some kind of angry face.  Some say the Sheelas were fertility goddesses, others believe they a defense against evil or bad energy similar to the function of a gargoyle.  They are often found over doorways or beside entryways in churches and castles. Ireland has the most known Sheelas of any country (101).  This Sheela-na-gig is hidden under the altar at St. Brigid’s Cathedral in Kildare.  As our Thin Places tour group wandered through this beautiful and ancient cathedral, one of the cathedral staff people pointed this out to me.  It was tough getting a picture (had to practically lay on the floor), but it was well worth it. 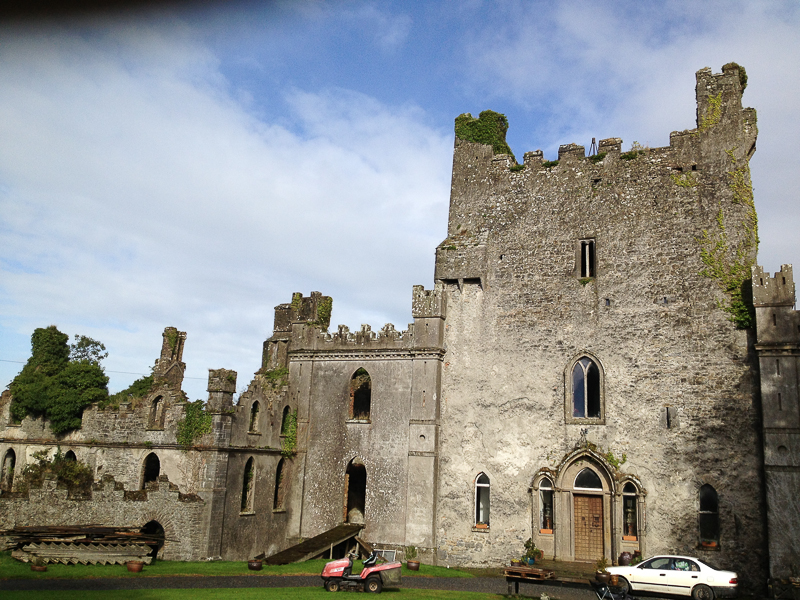 Leap Castle – home of the Bloody Chapel and the Elemental

Leap Castle is still being restored by its owner, musician Seán Ryan and his wife. The castle located in County Offaly was built by the O’Bannon clan in the 13th century, and later came under the ownership of the O’Carroll clan.  It is said to have been built on a former ceremonial site used by the druids, and archaeologists estimate there has been human habitation on the site since the Iron Age (500 BC). Leap is famous for being haunted, probably because of the violence that has occurred there.  The O’Carroll clan, warring over leadership resolved the conflict when one brother (a priest) was saying mass for his gathered family members in the chapel on the upper floor of the tower.  Another brother burst through the door and murdered the priest with his sword in front of the family.  Thereafter the upper floor of the tower was known as “the Bloody Chapel.” Leap also has an “elemental” or non-human spirit that has been seen as a shadowy figure that makes mischief. 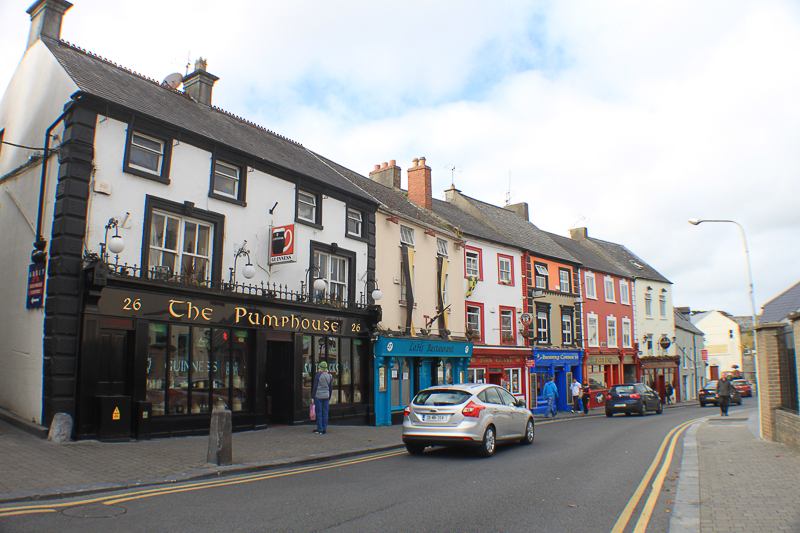 While we all love thin places and mystical landscapes, no travel to Ireland is complete until the visitor gets to experience the Irish culture, and Kilkenny is certainly a vibrant town of culture.  The name Kilkenny originates from the Irish words that mean Church of Canice and St. Canice’s Cathedral and round tower sitting atop a hill anchors one end of the city while Kilkenny Castle anchors the other.  In between are shops, galleries, pubs and heritage sites.  This was once a hub for monastic communities.  The Grey Friars were here as were the Franciscans – St. Francis Abbey is now home Ireland’s oldest operating brewery which makes Smithwicks and Kilkenny beer.  Walking the Kilkenny’s downtown is an excellent way to engage in conversation with the Irish, and the most memorable thing you’ll do on a trip to Ireland is engage with the Irish people.

All of the pictures above and the sites mentioned are part of our Castles, Saints and Druids tour for 2014. It runs from September 11 – 21st. It is a small, specialized tour focused on mystical sites ranging from the ancient druids to the monastic communities through the times of the British occupation.  The cost is $2099 per person + airfare.  For more details check out the Tour Itinerary.