The Man in the Sand in the Shadow of Mount Brandon 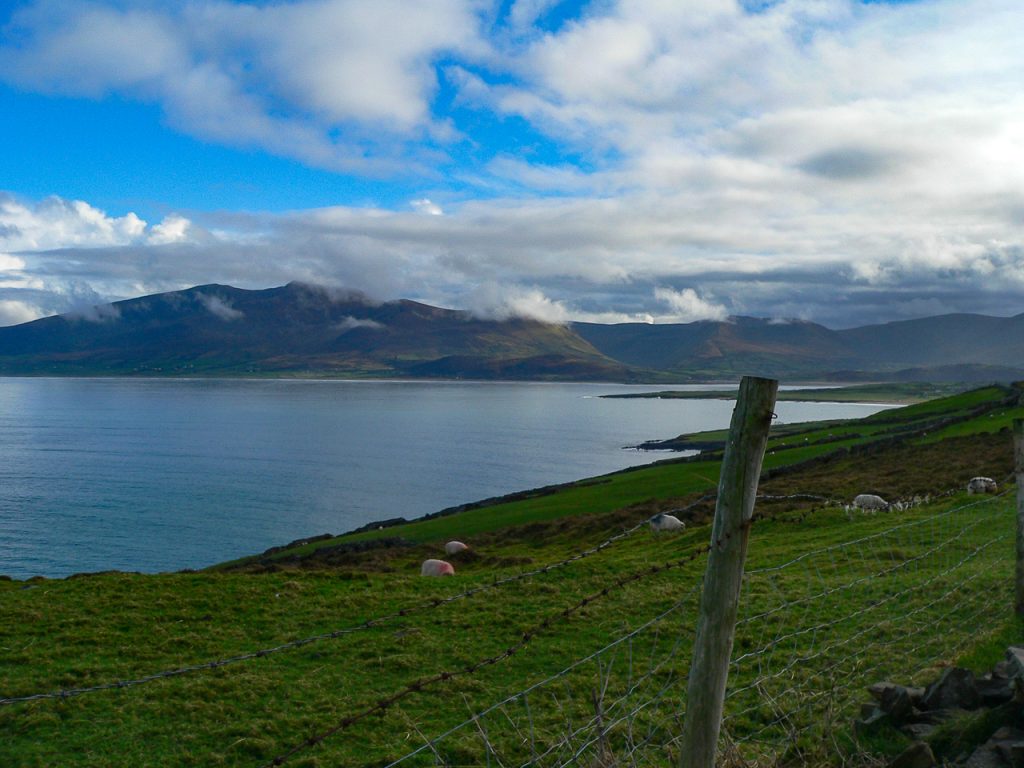 On a dreary February day many years ago, I was traveling alone in Ireland, doing some research for some writing I had to do on thin places in Ireland. Most of this day was spent on St. Brendan the Navigator who was born near Dingle and is a local heroic figure. I visited Ardfert, his first monastery, then Mount Brandon – the holy mountain named for him.

I was in a bad place personally when I wrote this travel journal entry. I’d been working on completing this book for years and I couldn’t move myself forward. No amount of research could push me to completion. Every time I started, I stopped. I had no confidence – filled with self doubt.

This was also a day of miracles – or coincidences. There’s something different about praying in a thin place, though. If you listen hard enough, sometimes you hear an answer or get a sign. This a day for one of those knock-you-in-the-head burning bush signs.

Mount Brandon is the second tallest mountain in Ireland and at its base, St. Brendan the Navigator is said to have launched his fleet of curraghs to set sail for the Promised Land as revealed to him in a vision. Prior to the voyage, he spent time on this holy mountain-top in reflection and prayer similar to St. Patrick’s retreat on Croagh Patrick.  Also similar to Croagh Patrick, it’s likely that both holy mountains were considered sacred by the local people long before Christianity came to Ireland.

To say the scenery here is breathtaking would understate. It’s magical. The dismal sky and drizzle offered a blue-gray backdrop, but allowed just enough sunlight to illuminate the vivid green fields dotted by sheep at the base of the mountain. Down on the strand the wet sand at the shore is firm – almost like slate. The waves rush in and then Atlantic sucks the surf back out almost a half a mile – leaving various shapes in the flat sand. I was the only one on the strand. The only human image in that landscape.

I pulled into a little car park for people walking out to the beach. It started to rain buckets. So I sat in the car for awhile reading over notes and other authors’ writing about thin places in Ireland. I opened up an article by a well-known author – one whose work had appeared on the New York Times Best Seller list. Though I loved this author’s works of short fiction, I was disappointed in how sappy and trite this piece on thin places was. The writer overtold the meaning. The work left me feeling the writer was trying more to project a sense of spiritual superiority than remark on the mystery of a thin place.

I thought to myself, “how is it that this successful author can get stuff like this published about this places, and I can’t write a word?”

Rain stopped. I continued my indulgence in self-pity as I walked out onto the strand.  The tide was out and the sand seemed to stretch on forever. Mount Brandon dominated the landscape. I noticed a pale light hanging it illuminating a very low, wispy cloud just touching the peak. I was then then I stepped into the moment – feeling no passing of time… just being. 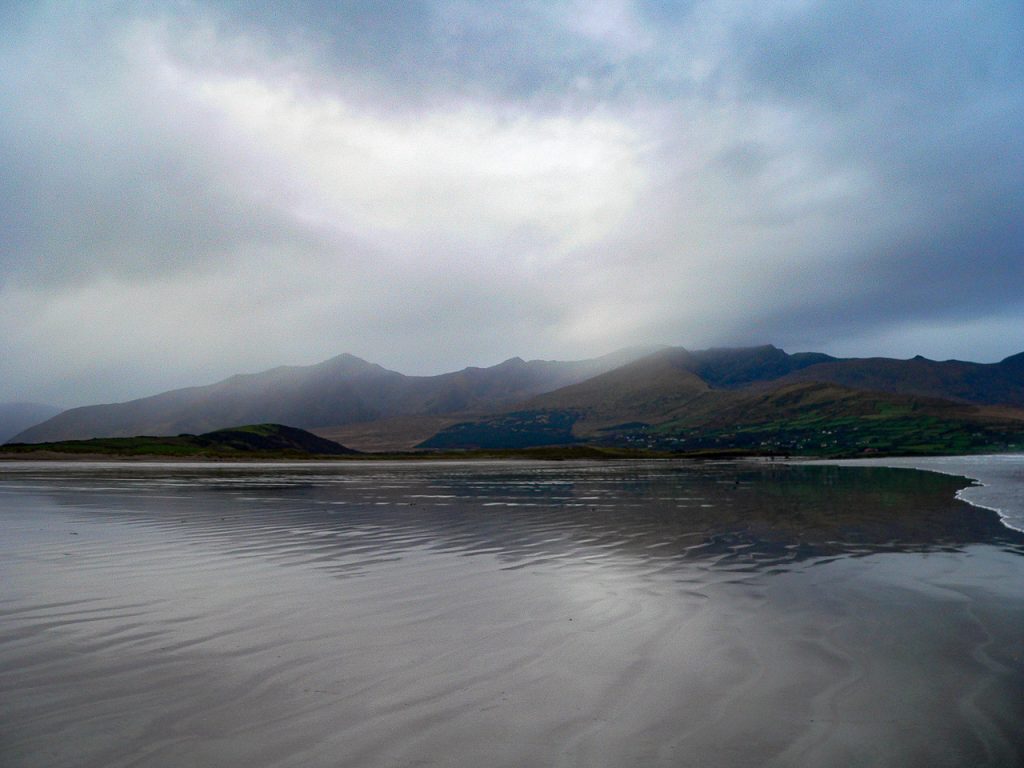 With a great sense of inadequacy, I turned to God, or whoever might be listening and said, “I can’t write. No matter how hard I try. I can’t write.”

My one-sided conversation was pretty anti-climactic. But then I looked down at the sand. There was an image created by the receding waves. It seemed to have a head, body, legs, and its right hand was extended with what looked like a flower or a box or something. It looked like a faceless man in a cloak. I thought, “Am I really seeing that?  I’m just imagining that it looks like a man in the sand. But it didn’t wash away or fade away. So I started snapping pictures.

Even after fifteen minutes the man in the sand was just as clear as he was when I first noticed him.  At times like this, I guess we try to find meaning. Was it a sign? Did it mean something? If so, what? I was reluctant to ascribe any meaning to the man, but it sure felt like …. something. 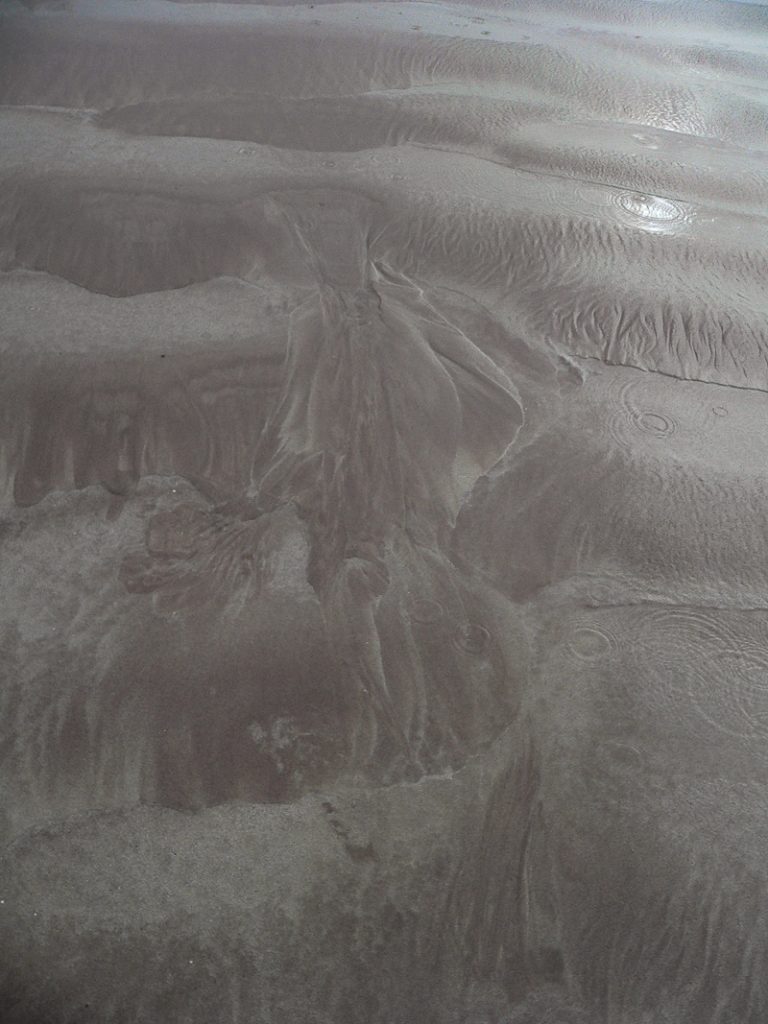 It was surely a synchronistic moment.

Caitlin and John Matthews remind us that we communicate with our five senses in the physical world, but we communicate with our spirit in the spirit world. They also give us insight on how to perceive coincidences moments of synchronicity – the simultaneous occurrence of events that appear significantly related but have no discernible causal connection. Here’s a quote referencing this from their book, Walkers Between the Worlds.

“… synchronicity… is actually an instance of an exact match between the fabric of our world and that of the Otherworld. While we normally dismiss such an occurrence as coincidental, in looking more deeply we can see the exact correspondences between one world and the other.”

After I was done with my man in the sand, I turned to leave. I was headed by car to the foot of Mount Brandon. There’s a road that winds around past Brandon village and ends at a place called Ballydavid north.  It’s as far as you can go around Brandon Bay and the road ends at a little car park where one can take off up the mountain on foot. The rain was coming back and about to pour. The sky was black. As I turned to leave the beach I notice a bright ribbon of a rainbow in the eastern sky. Wow. 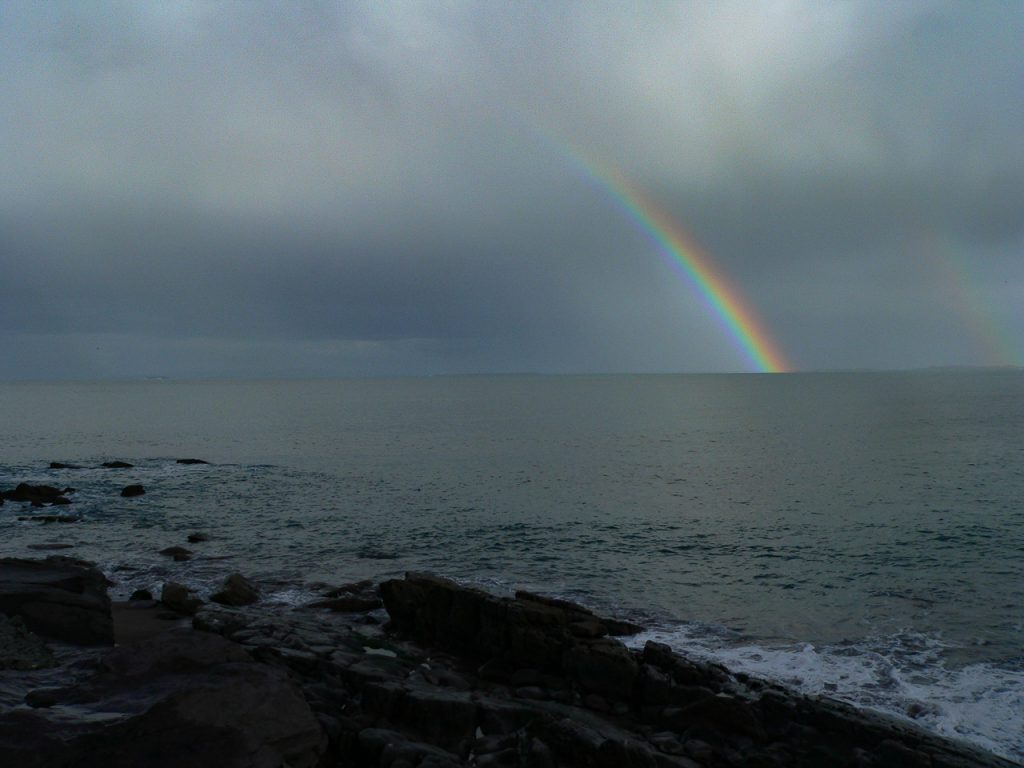 I got to the car and headed out.  For 20 minutes I drove and for 20 minutes that rainbow followed me.  It was still there when I got to the foot of Mount Brandon. And I stayed there another twenty minutes as the rain fell and the sky cleared … watching it fade away. What a day. 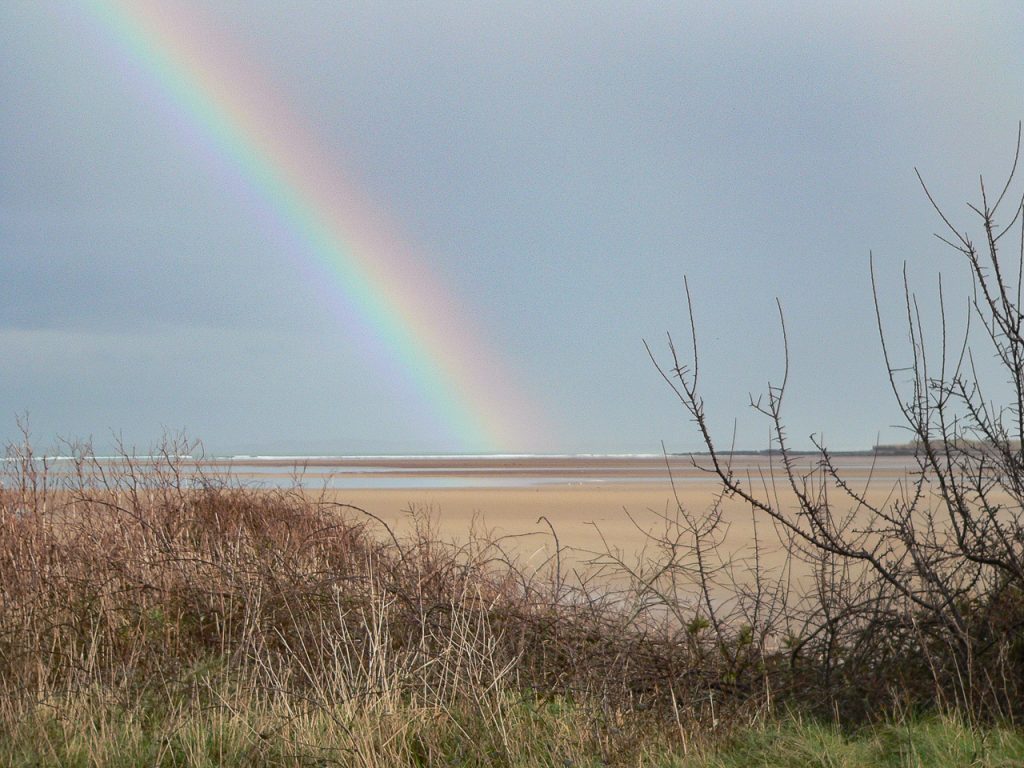 The eternal world or spirit world or Otherworld is one side of reality while our physical world is the other. But together they show us one world, one reality. A thin place brings us face to face with these two sides of one reality, and our prayers – our conversations with the Creator are whole and enjoy a sense of completeness.

Fermoyle Strand and Mount Brandon are thin places. At the time I was experiencing the above-mentioned synchronicity in Dingle I didn’t understand what any of it meant. Thus the importance of journaling and taking photo images. As we grow in spirit, so does our understanding.

And when I got home … I couldn’t stop writing.  I’m still writing.