White Park Bay on the Antrim Coast – Where the Sand Sings 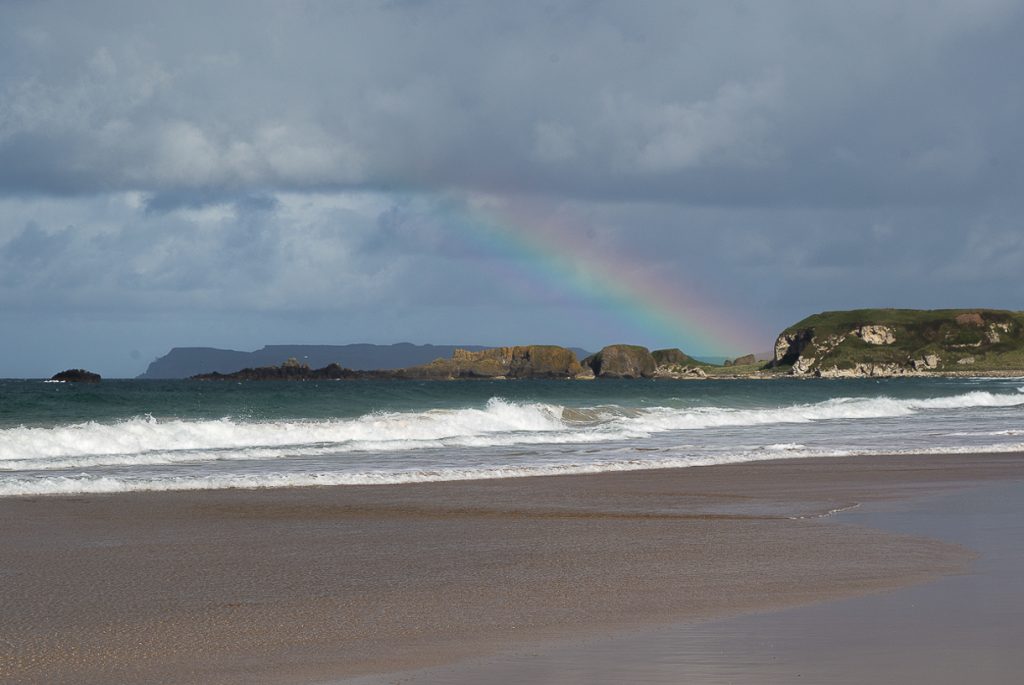 White Park Bay sits on the Antrim Coast between Ballintoy and the Giant’s Causeway. It’s a two-mile long, crescent shaped beach with a series of dunes that run up to a chalk cliff border.  The landscape is an ancient one, and many believe that it was here that the first settlers entered Ireland.  Artifacts found in the region date back to 8000, B.C.

Archaeologists believe that White Park Bay was a manufacturing hub for axes and arrow heads due to the availability of flint nodules in the cliff-face.  The dunes just below the cliffs have been declared an Area of Scientific Interest due to the abundance of the fossils found in them and around them.  The dunes are brush covered but in the brush are rare plants, grasses and a variety of orchids. 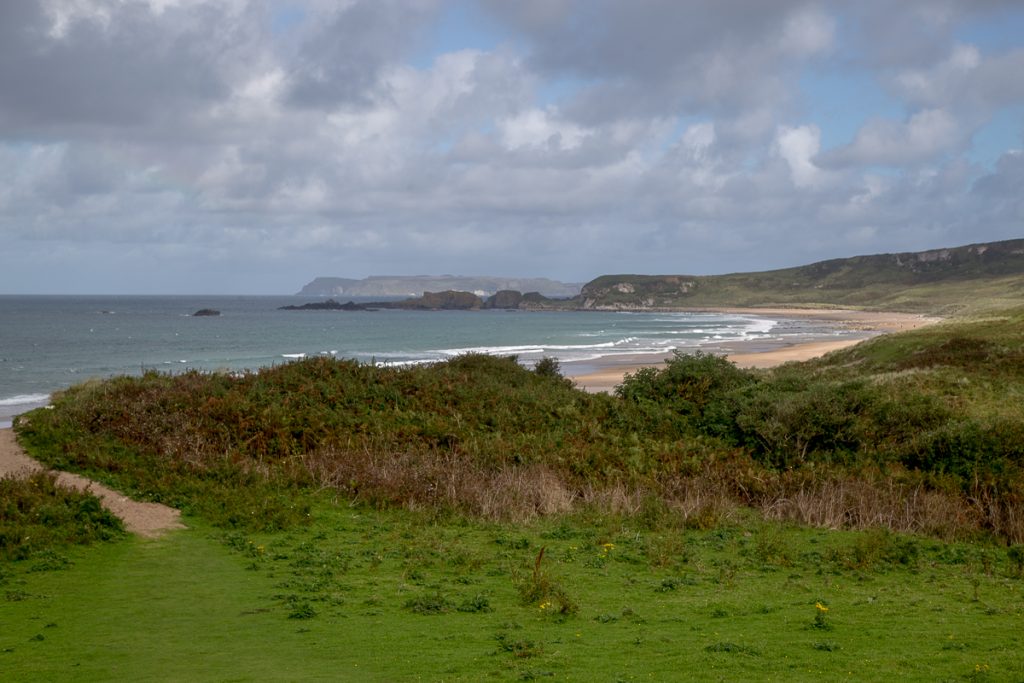 The views are stunning, and if you’re lucky enough to get there on a clear day, it’s possible to see the coast of Scotland across the Irish Sea.

Buried under the brush in the cliff-face is an old passage tomb probably dating back to 3000 B.C.  If you walk to the center of the crescent and stand with your back to the water’s edge looking back to the cliffs, you can there are 3 more passage tombs in the landscape.  They are on higher ground across the road rising above the chalk cliffs.  All these tombs face the sea.  It makes one wonder if this area isn’t part of larger sacred landscape.

Sacred landscapes are charged with earth energies.  White Park Bay has a rare energy and elements of enchantment.  A man-made stairway makes getting down the cliff-face from the car park easy.  The stairs empty onto a path that winds past the ruins of an old school and out to the wide beach. 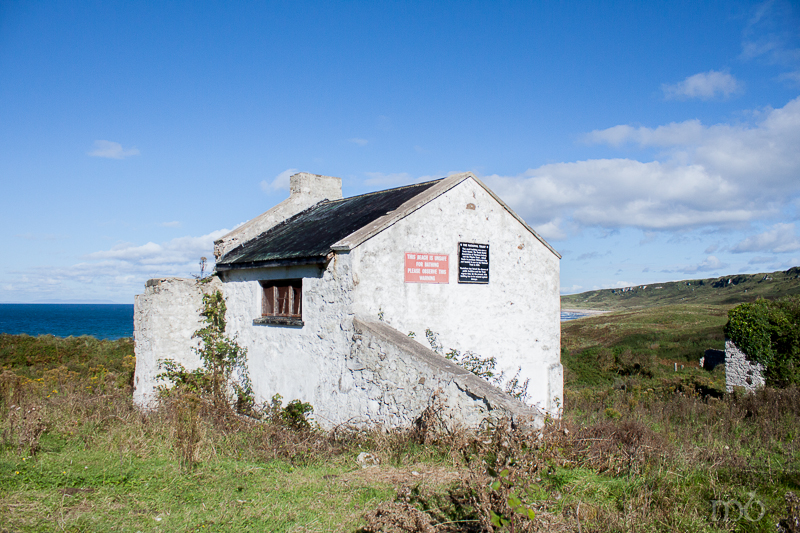 Footsteps on the sand create a kind of “singing” or humming sound.  This singing sand  phenomenon that occurs on some beaches in the UK and in only 30 places around the world. Sometimes it’s a squashing sound that is made as a result of feet hitting the sand as a person walks across.  More pronounced “singing” occurs as a vibration – a sort of humming that washes across the entire landscape.

The day I visited White Park Bay, I specifically listened for the singing and didn’t hear it.  Finally I picked up on the squashing sound when I walked across the sand, but that was near the dunes where the sand was more loose and dry.  But when we came out into the open – out in front of the dunes, I heard it faintly at first … the buzzing sound … a hum.  Then it faded.  But it was a remarkable thing to hear.

This video on www.BoreMe.com demonstrates both kinds of singing sand and offers some explanations about why this phenomenon occurs.

Faces in the Stones

The stones on the beach at White Park Bay are either smooth like river rock or sharply cut like fossils.  The stone colors are mostly white accented by shades of grey, but they’re incredibly bright.  I’ve seen faces and shapes in random stones before, but it’s usually one or two after I’ve combed through stones for about an hour.  And White Park Bay they seemed to pop out of the landscape everywhere.   I found myself seeing faces on every other stone. This is a psychological phenomenon – seeing faces or shapes in meaningless randomness.  Carl Sagan suggested that humans are hard-wired to look for the human face. Psychics and Spiritualists will say this is part of being Clairvoyant – that the shapes or face images are derived from both the brain and a universal source. 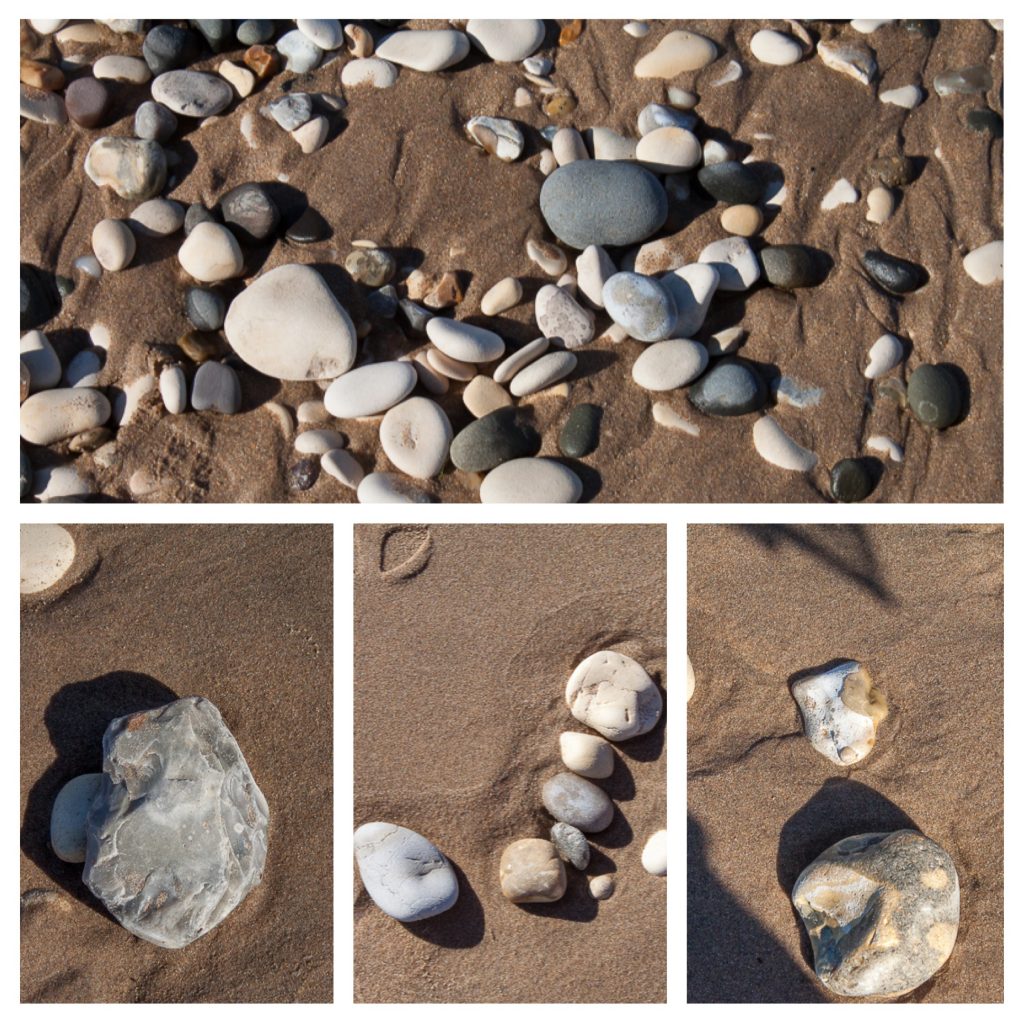 Whatever it is – a psychological phenomenon or a psychic capability, it seems to happen in exponential proportions at White Park Bay. 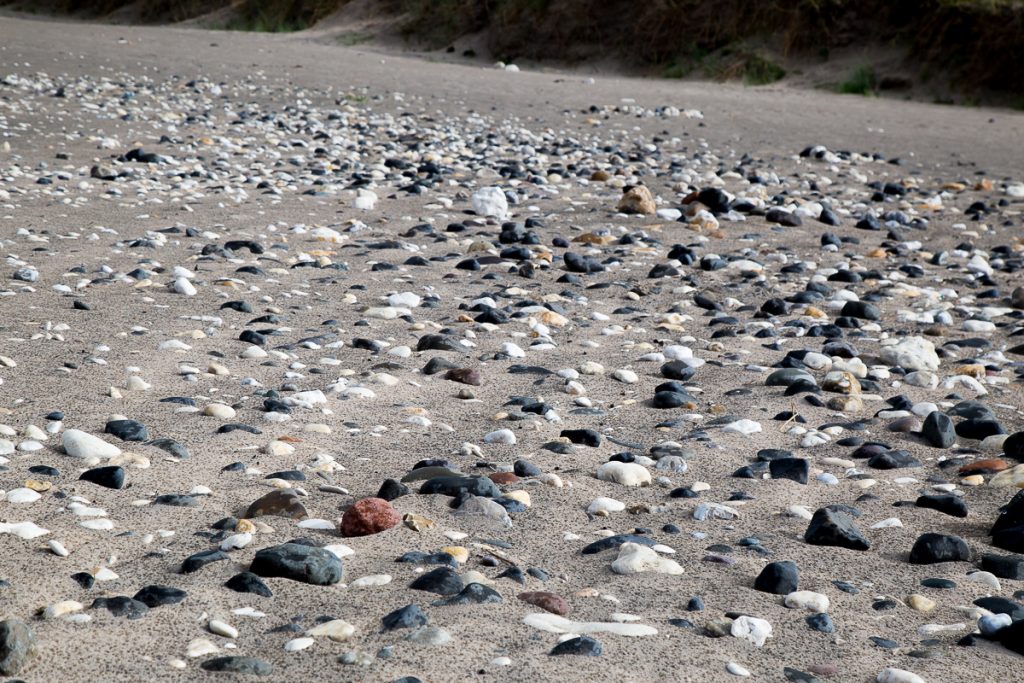 I visited White Park Bay with my friend Maura Brooks who lives in County Tyrone.  I was telling Maura about a tradition I started with my twin granddaughters since I travel so much.   I always bring each of them a heart-shaped stones from wherever I’ve gone.  The easiest place to find them is on a beach where there is an abundance of stone.

I’m usually pretty lucky and after about a half hour to an hour I’ll be able to find two that resemble a heart shape.  If I’m with my husband, he’ll help and we both look. So I asked Maura to help me look at White Park.  Within minutes after beginning the search I found a perfectly shaped heart stone. Then another. Then a third.  It was crazy.  The hearts were all but jumping out of the sand.  Maura found several as well.  Within about 10 minutes we found eight heart-shaped stones and two feathers.

In the Celtic tradition, feathers a symbolic of knowledge from the celestial realm. Egyptians, Europeans, the Nordic people and First Nation people in the Americas all shared a similar interpretation of feather symbolism and used feathers as ornaments in ritual dress and practice.  Basically, feathers symbolize the connection between the heavenly world and the physical world. 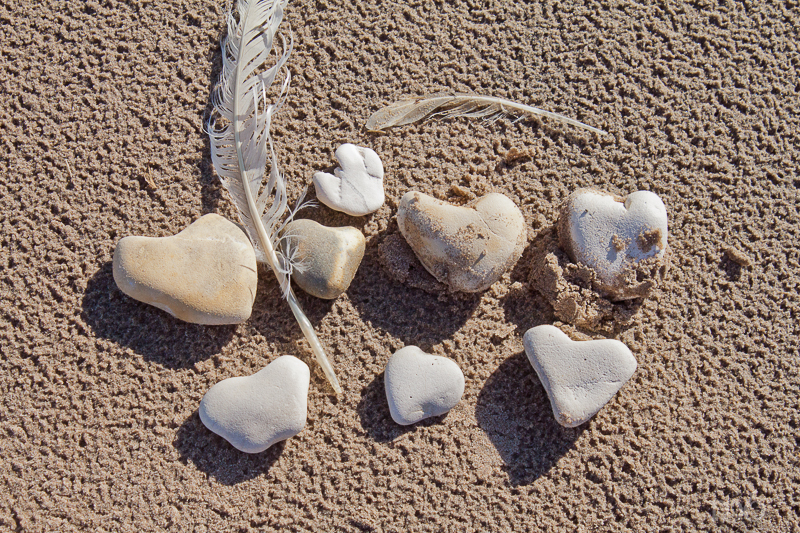 First the singing sand, then the stones with faces, and now the hearts finding us.  This was a magical place.

Touching the Other Side at White Park Bay

My friend Maura is a psychic and a medium.  When we first walked out onto the beach there was a  large stone with a child’s shoe on it.  I assumed someone found it and set it on the stone in case a parent came back looking for a lost shoe.

When we left White Park Bay and climbed the stairs that led back to the car park, we noticed a bench that visitors could sit on and look out across the beach and sea.  It was almost at the very top of the cliff.  The panoramic views from there were awesome.  It was an amazingly peaceful setting.

I sat down on the bench, then we both noticed that just in front of the bench were wilted a cluster of wilted lilies. 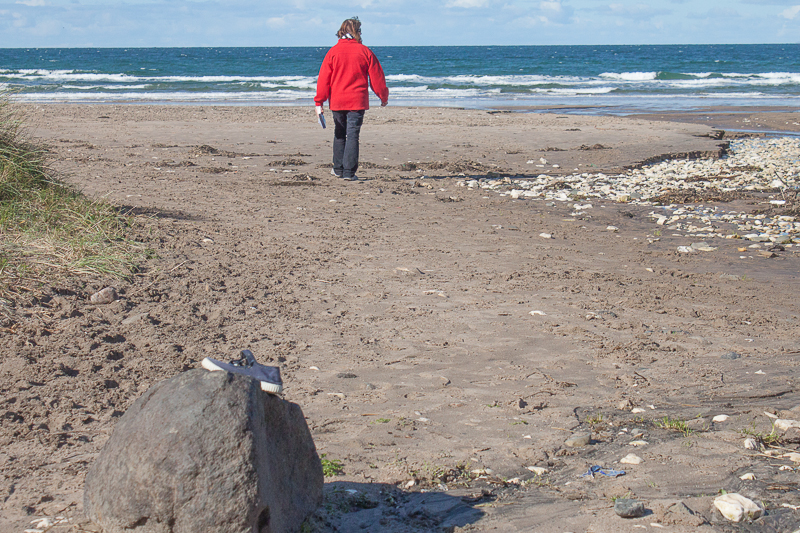 Then Maura heard the words “Good-bye, little one.”  She sensed that the shoe belonged to a child who died and the parents placed the shoe on the stone and then released the child’s ashes over the cliff in front of this bench – and then left the lilies as a symbol of remembrance. 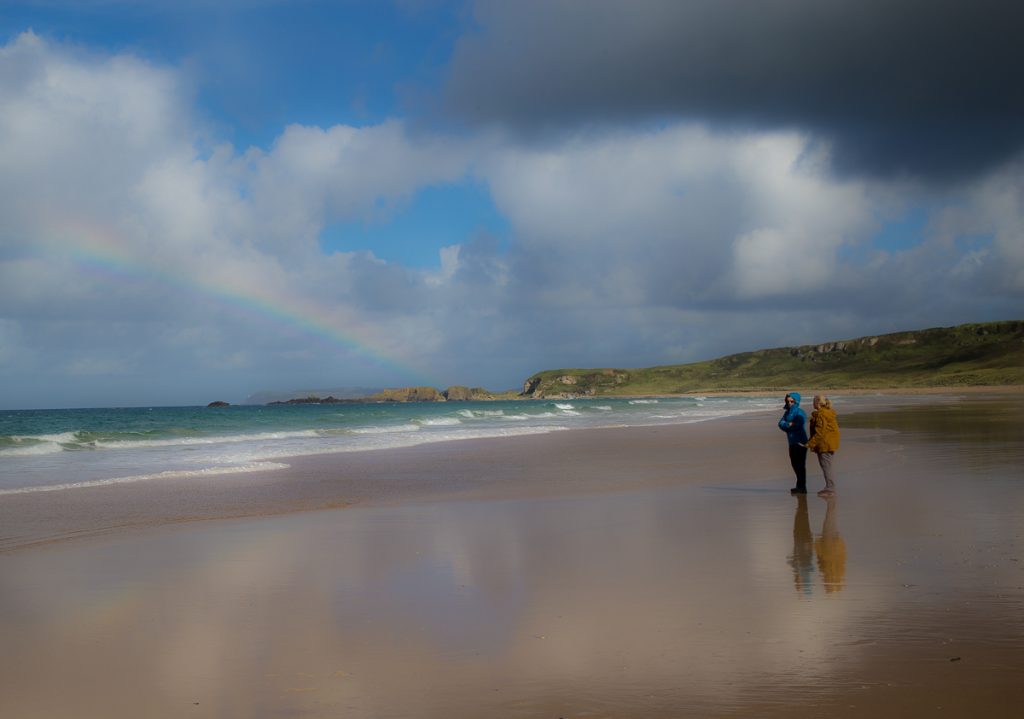 White Park Bay is a secluded beach in a pristine setting that is worth seeing if just for the stunning beauty of the Antrim Coast.  But if your senses are keen and you open yourself to the eternal world, White Park Bay is one of those rare, thin places where it’s possible to walk in both worlds simultaneously.

White Park Bay is on the Discover the North Ireland Tour .