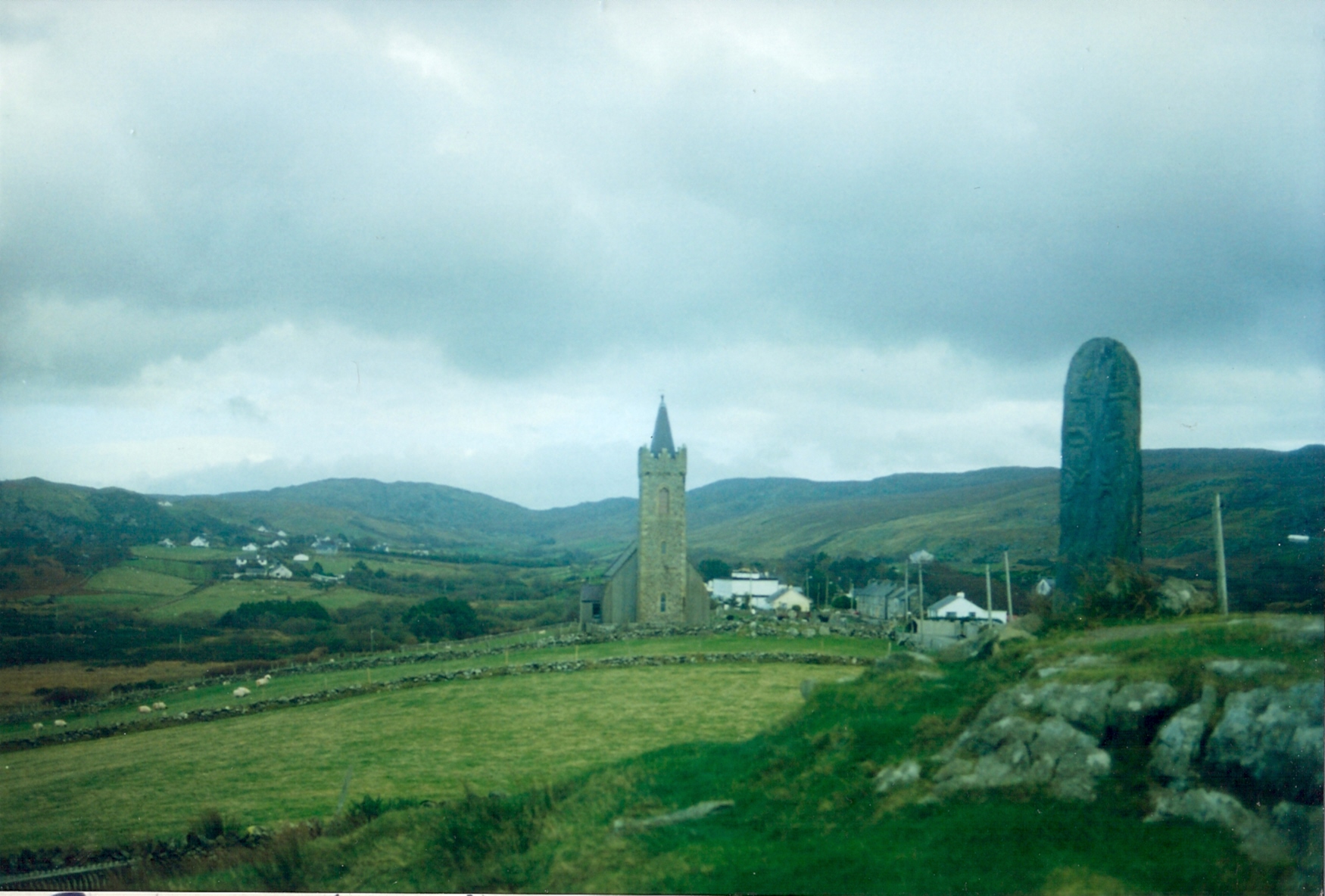 Glencolumkille is a rural parish in southwest County Donegal.  It is most known for its pilgrimage that honors the patron saint and protector of Donegal, St. Columba.  There are many variations of his name (Columbkille, Colmcille).  The Pilgrimage of St. Colmcille, also known as the Turas Cholmcille honor the saint while personally drawing his blessing and strength by walking in his footsteps across a land that was once his home.  There are 15 stations scattered throughout an enchanted glen – each marked by a pillar stone or cairn or some type of stone marking.

My favorite definition for “pilgrim” was written by Paul Elie, found in his book The Life You Save May Be Your Own, a book about great writers and the power they have over us.  Paul says, “A pilgrim travels within the context of a story, in order to be changed by the story.”  The definition certainly fits the pilgrims who do the Turas in Glencolumkille. 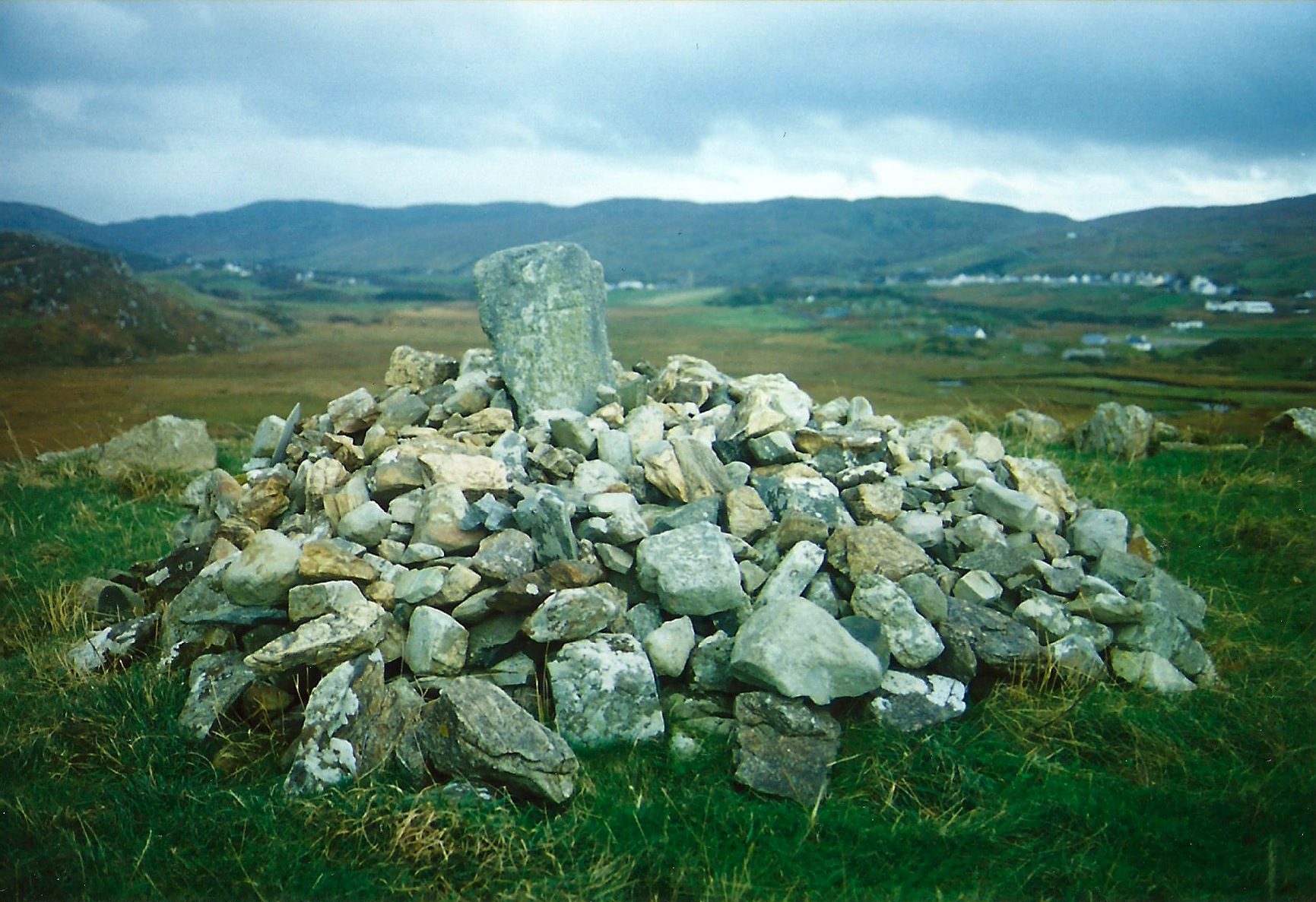 To remember the story of St. Columbkille is to remember a man who was a descendent of the ruling tribe – royalty in his day.  A man who was educated and tutored by the best scholars. Columbkille was a leader who could shape meaning from circumstances.  He founded more monasteries and monastic communities than any other single Irish saint.  But pride got the best of him when he was at his most powerful, and he picked an fight with another saint – St. Finian who had an illustrated psalter.  St. Columbkille secretly copied St. Finian’s book so that he would have a copy for himself.

St. Finian was offended and demanded Columbkille’s copy.  Columbkille refused saying knowledge gained from books should be shared not coveted, especially when pertaining to God. Finian took the matter to the High King for arbitration and the High King ruled in favor of St. Finian with a famous statement – “To every cow its calf and to every book it’s copy” meaning every calf belongs to its mother and every copy of a book belongs to the original book’s owner.  Columbkille was outraged in losing the battle and this disagreement eventually led to Columbkille’s tribe attacking a tribe to the south which led to the slaughter of over 3000 people.

Columbkille was so ashamed to have been the root of so much death and destruction in his native land, that he sent himself into voluntary exile.  He sailed from his beloved Derry to Scotland landing with a few followers on the island of Iona where he established a  community which flourished into a great seat of learning and spiritual growth.  Iona still has a community there and it continues today to draw pilgrims. 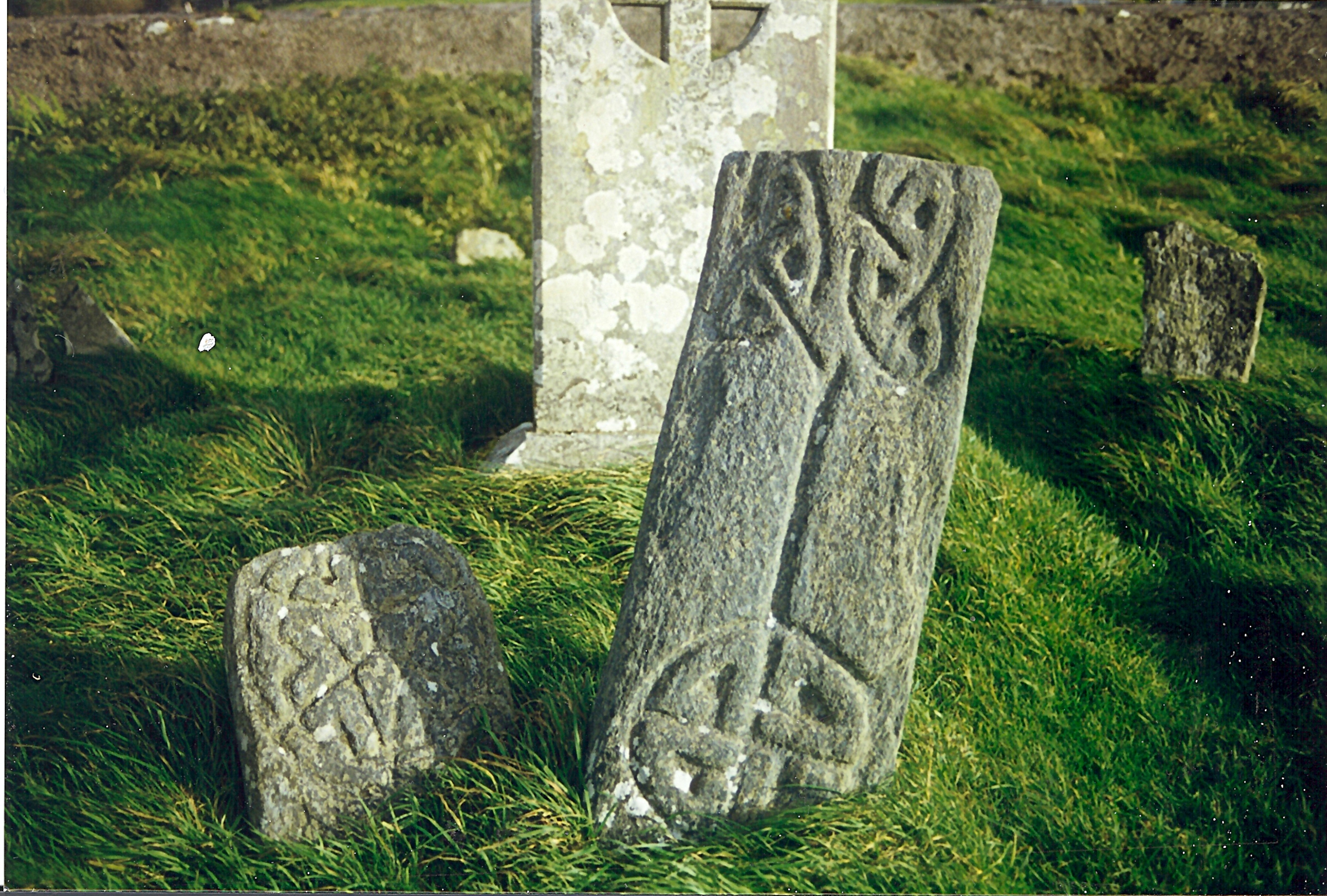 So as the pilgrims travel through the station in Glencolumbkille, they reflect on the saint’s life, his strength, his weaknesses and his devotion, and they ask his blessing for own lives.  Every station has a ritual, a prayer to be said, a devotion to be made.  So that when the turas are all done, the pilgrim has drawn strength from both the story and energy of the land. 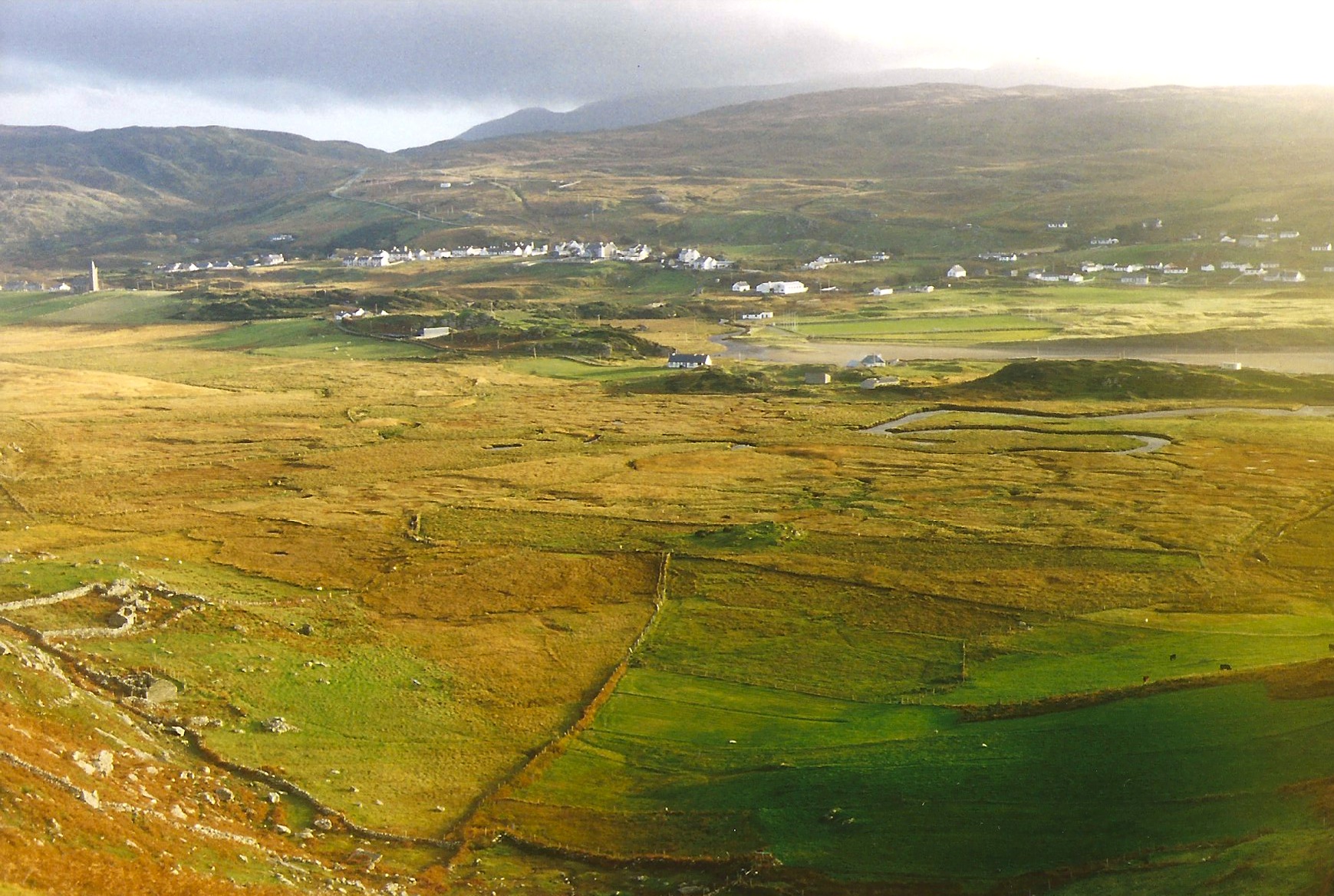 Though Ireland has suffered in recent years with abuses committed by Catholic clergy which has rocked the faith of many, there are still hundreds that come to the glen each year to do the rounds.  This kind of joining of devotion, spirit, land and healing never betrays trust. 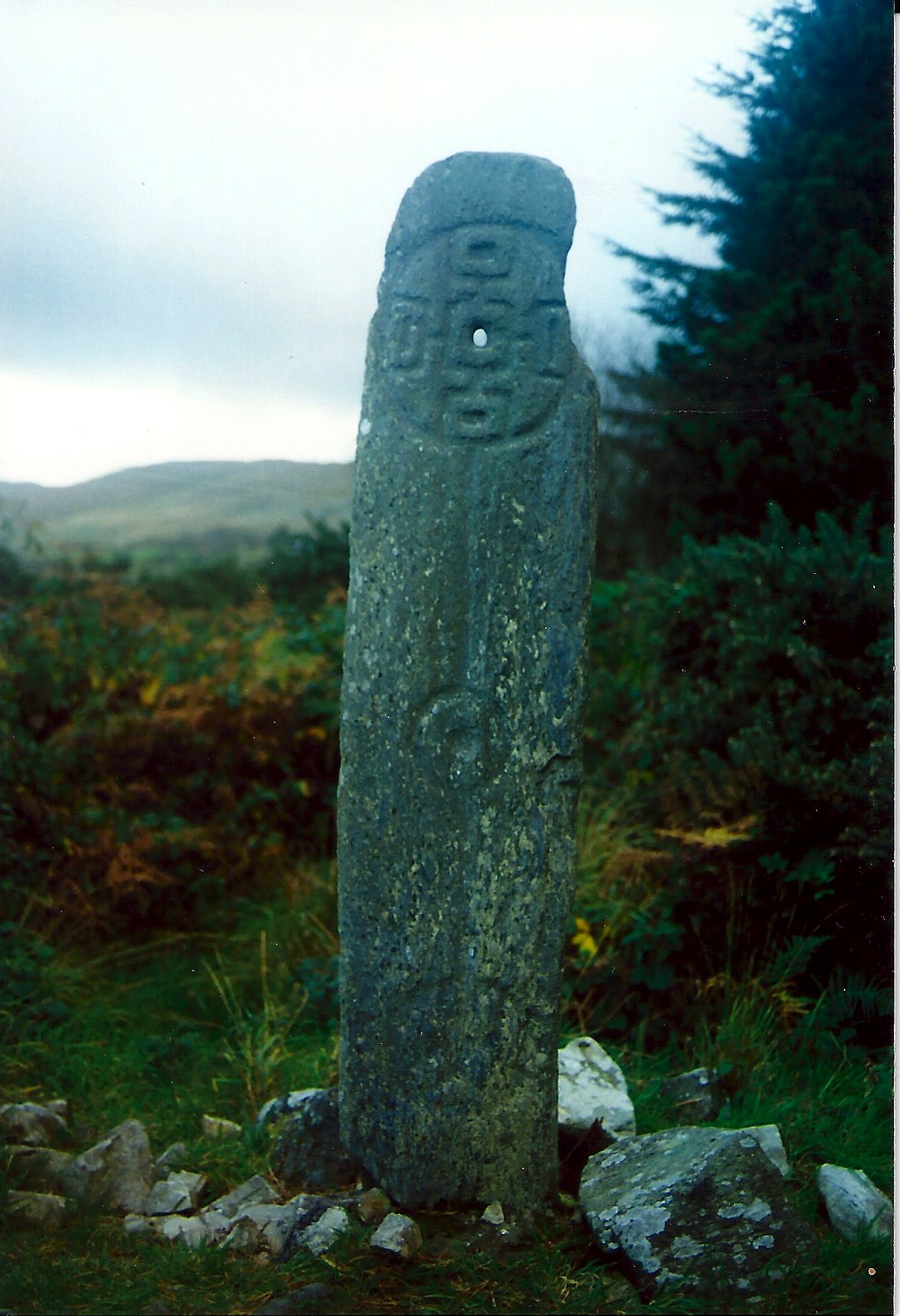 The Stone of Gathering

I visited Glencolumbkille shortly after I married my husband.  Our favorite spot was the Stone of Gathering (Turas 9).  This tall carved pillar has a hole in the top.  The stone was tied to a tradition where engaged couples would intertwine their fingers in the hole while professing their love and commitment to each other before a gathering of community members.  There is also a tradition that if you peer through the hole (as Dan is doing in the image above) you will get a glimpse of heaven.  The view from where Dan is standing is breathtaking.  There is a special energy around this pillar… a kind of loving, warm, peaceful energy.

At the southwestern tip of Glencolumbkille is Slieve League (Sliabh Liag) which is the highest cliff face in Western Europe.  The monastic serenity that blankets the entire glen and its scenic surroundings moves from peaceful to powerful – back and forth – and the prayers of the pilgrim mirror that energy. 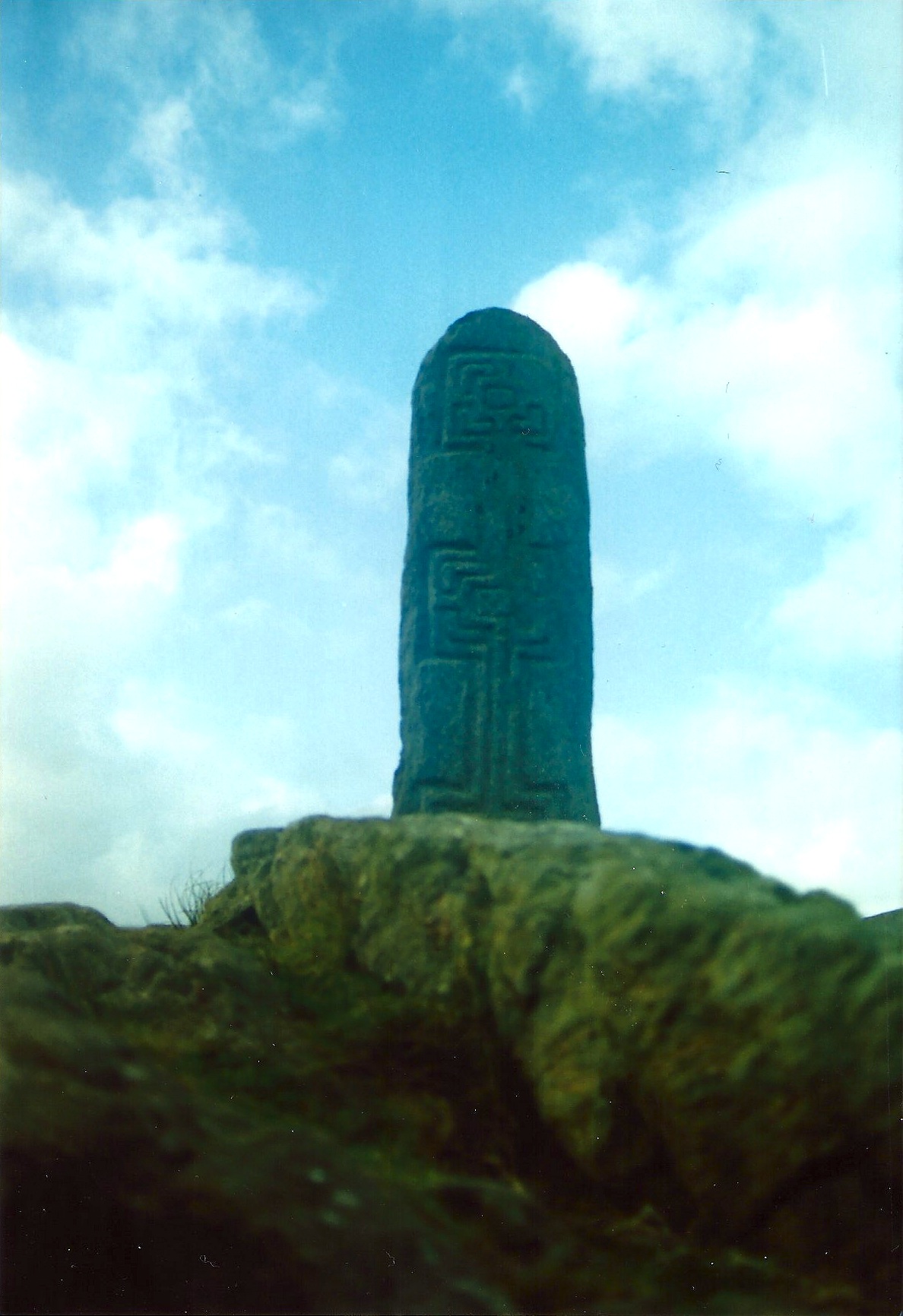 “…echoes of the centuries’ feet
That moved along the penitential stones
In all thy winds are sweet.
Here came my fathers in their life’s high day
In barefoot sorrow, but God knows the whole:
Not for themselves they fasted, but to lay
Up riches for my soul.”

taken from “A Shrine of Donegal”  from The Collected Poems of Charles Leo O’Donnell. Shared with me by Eunan O’Donnell of Ardara.

Glencolumkille and Slieve League are stops on the 2013 Thin Places Mystical Tour of Ireland.  Check out the itinerary.