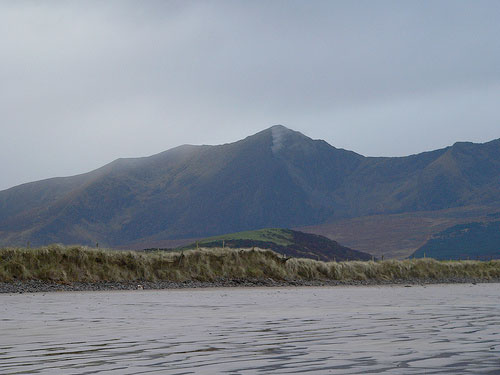 Mount Brandon – the Holy Mountain of St. Brendan on the Dingle Peninsula

St. Brendan, one of the Twelve Apostles of Ireland, was a holy man and a navigator.  He was born and raised in the Dingle area, and  ordained a priest in 512 AD.  Brendan  was  founder of several monastic settlements in Ireland, one being at the base of of a great mountain on Dingle’s north shore – now known as “Mount Brandon.”

The mountain was named after the famous St. Brendan, perhaps because he founded a monastic community here, or more likely because it was from the base of this mountain that St. Brendan launched his fleet of curraghs, filled with his followers, to set out on a seven year spiritually guided journey to find the “promised land” – the Isle of the Blest.

Legend states that St. Brendan climbed to the peak of Mount Brandon, looked across the Atlantic and saw the Americas.  Many believe that Brendan reached North America way before Christopher Columbus, and several groups have alleged that Columbus referred to a manuscript that told of Brendan’s journey across the Atlantic.  Much has been written about the Voyages of Brendan. What we know to be true is that Brendan grew spiritually on the journey and returned with the ability to draw large numbers into a deeper spiritual existence

St. Brendan is the patron saint of sailors and of travelers and is still reverenced in Ireland and around the Christian world.  And the holy mountain, named for him, that dominates the northern landscape in Dingle is a reminder of where the journey began for a great spiritual leader, and where the journey begins – even today – for those that try to follow in his footsteps.

Brandon Head, the alleged launch site for Brendan and his followers, can only be accessed by foot.  There is a pilgrim’s path that runs along the mountain that hikers and walkers traverse. The views from this trail are remarkable.  But if you can’t take the walk, the views from Kilshannig, Castle Gregory or any of the strands off the northern road offer tremendous views.  Often, the peak of Mount Brandon is hidden in the clouds.

Mount Brandon is a thin place.  I had one of the strongest touches from the other world on a strand facing Mount Brandon. That story may come in another post.

Shall I abandon, O King of mysteries, the soft comforts of home? Shall I turn my back on my native land, and turn my face towards the sea?

Shall I pour out my heart to You, confessing my manifold sins and begging forgiveness, tears streaming down my cheeks? Shall I leave the prints of my knees on the sandy beach, a record of my final prayer in my native land?

Shall I then suffer every kind of wound that the sea can inflict? Shall I take my tiny boat across the wide sparkling ocean? O King of the Glorious Heaven,
shall I go of my own choice upon the sea?

O Christ, will You help on the wild waves?